EXCLUSIVE 'I stand with Trump': Steve Bannon tells the January 6 select committee that he will NOT comply with their subpoena because the former president has 'executive privilege'
Steve Bannon's lawyer tells House committee he will not comply with subpoena
'I stand with Trump and the Constitution,' said former White House strategist
Lawmakers had asked him for documents and testimony on the Jan. 6 attack
But his lawyer, Robert Costello, said Trump's 'executive privilege' meant that Bannon was unable to comply
It sets up a possible legal challenge to force Bannon and other aides to testify
The committee said it would consider criminal contempt proceedings

Former White House strategist Steve Bannon on Friday said he stood solidly with former President Trump and will not be cooperating with its investigation into the Jan. 6 attack on the U.S. Capitol.

'I stand with Trump and the Constitution,' he told DailyMail.com.

Bannon was one of four former officials that the House Jan. 6 committee subpoenaed to provide documents and testimony as they investigate the violence that engulfed the Capitol after a Trump rally nearby.

All four were told by the former president's attorney on Wednesday that he planned to defend himself against what he viewed as an infringement of 'executive privilege.'

In a letter sent to the committee, seen by DailyMail.com, Bannon's lawyer wrote that he would honor Trump's claim.

'As such, until those issues are resolved, we are unable to respond to your requests for documents and testimony.' 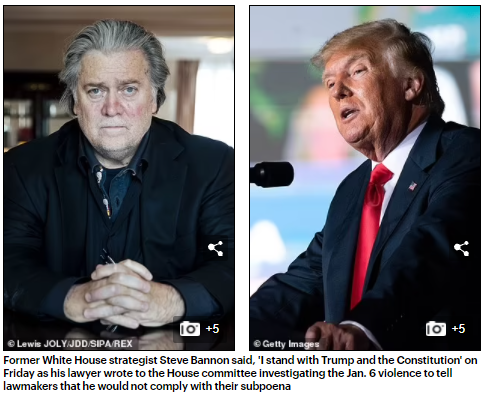 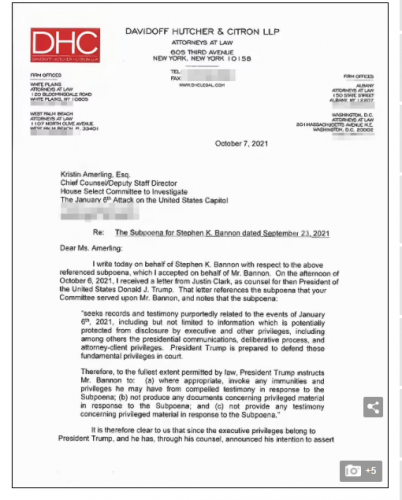 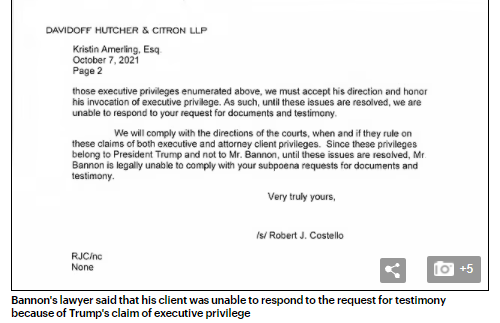 The letter goes on to say that Bannon will comply with the direction of any court ruling on claims of executive privilege.

'Since these privileges belong to President Trump and not to Mr. Bannon, until these issues are resolved, Mr. Bannon is legally unable to comply with your subpoena requests for documents and testimony,' it concludes.

Costello is a former deputy chief of the criminal division for the U.S. Attorney’s Office in the Southern District of New York.

The letter sets the stage for a legal challenge to force Bannon to testify.

And it sets up a likely clash with House Democrats, who are investigating the role of Trump and his associates in the build up to the riot.

The committee responded by warning of criminal proceedings.

'We will not allow any witness to defy a lawful subpoena or attempt to run out the clock, and we will swiftly consider advancing a criminal contempt of Congress referral,' said its Chairman Bennie Thompson and Vice Chair Liz Cheney.

In its letter to Bannon, the committee wrote: 'You have been identified as present at the Willard Hotel on Jan. 5, 2021 during an effort to persuade members of Congress to block the certification of the Election the next day, and in relation to other activities on Jan. 6.' 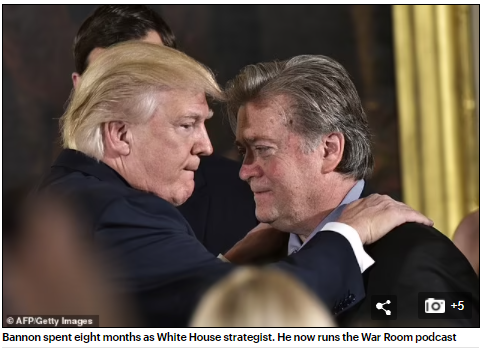 It also pointed out that he told listeners of his War Room podcast on Jan. 5 that 'all hell is going to break loose tomorrow.’

For Scavino, the committee referenced tweets sent by Trump’s former social media lead and asked him to turn over video recordings of the president's message to supporters telling them to go home as the violence unfolded.

The deadline for them to respond was midnight on Thursday.

Lawmakers believe they can win a challenge over executive privilege as Trump is no longer in office and some of those subpoenaed were no longer working for him on Jan. 6.

Trump himself railed against what he called a partisan investigation this week.

'The Unselect Committee of partisan Democrats, and two very weak and pathetic RINOs, should come to the conclusion after spending many millions of dollars, that the real insurrection happened on November 3rd, the Presidential Election, not on January 6th - which was a day of protesting the Fake Election results,' the ex-president claimed in an interview with Sean Hannity.
images/ondertekening.jpg
Omhoog
Plaats reactie
1 bericht • Pagina 1 van 1