Gladys Berejiklian has announced her “difficult decision” to resign as NSW Premier.

It comes after the NSW Independent Commission Against Corruption (ICAC) confirmed it is investigating whether the NSW Premier “breached public trust” or “encouraged corrupt conduct” in a bombshell statement outlining the probe.

Ms Berejiklian said it “pained her” to make the decision, which comes after “challenging weeks of the most challenging times in the state’s history” — but that she had “been given no other option”.

“I have made it clear on numerous occasions that if any of my ministers were the subject of allegations being investigated by an integrity agency or law enforcement, then he or she should stand aside during the course of the investigation until their name was cleared,” she said.

“The reason for my stance was not to have made any presumptions, as to their conduct, but rather to maintain the integrity of the public office which has held, which that person is held whilst an investigation was completed, that same standard must always apply to me also as the premier however standing aside is not an option for me as the premier of New South Wales, the people of this state. The certainty as to who the leader is during the challenging times of the pandemic.

“I cannot predict how long it will take the ICAC to complete this investigation, let alone deliver a report in circumstances where I was first called to give evidence in a public hearing nearly 12 months ago.

“Therefore, it pains me to announce that I have no option but to resign from the Office of Premier, my resignation will take effect as soon as the New South Wales Liberal Party can elect a new parliamentary leader in order to allow the new leader and government, a fresh start.” 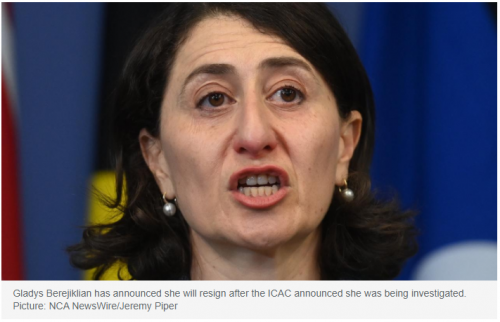 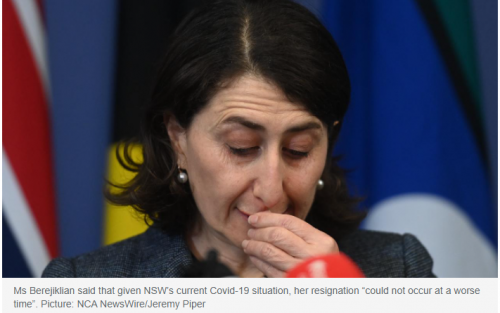 Ms Berejiklian said that given NSW’s current Covid-19 situation, her resignation “could not occur at a worse time” and doing so “is against every instinct in my being and something which I do not want to do”.

“I love my job and I love serving the community, but I have been given no option. Following the statement that’s been issued today, to continue as Premier would disrupt the state government during a time when our entire attention should be focused on the challenges confronting NSW,” she added.

“I do not want to be a distraction from what should be the focus of the state government during this pandemic, which is the wellbeing of our citizens. It always has been and always will be.”

In her “final” address as Premier, Ms Berejiklian thanked her family, friends, public servants and “most importantly...the people of NSW”.

“We’ve grieved and supported each other during these tragedies,” she said.

“I hope you know that you will remain foremost in my thoughts, the courage that you display in your lives every day has inspired me every step of the way, the courage and the support you’ve shown me has humbled me and made me a better leader and a better person.

“Serving you has been the greatest privilege of my life. Please know that every day I gave it my all and worked as hard as I could to create a better future for our state and its people. I truly believe that NSW is a place where every person, irrespective of their background and circumstances has the opportunity to be their best to make a difference.

“So as I address you for the final time as your Premier. Please stay the course and stay safe. We will be shortly out of this lockdown and be able to get on with our lives. New South Wales and its people will come out of this lockdown stronger, and together we will build a future full of optimism and hope. Finally, thank you again for giving me the honour of being your Premier.”

Scott Morrison has reacted to news of Gladys Berejiklian’s resignation as NSW Premier, describing her as a “vibrant spirit” who has displayed “heroic qualities”.

The Prime Minister, who was holding a press conference at the same as Ms Berejiklian’s, said he had “no knowledge” of her announcement until he was informed by reporters.

But, he described her as a “dear friend of mine”.

“We’ve known each other for a long time. She has displayed heroic qualities - heroic qualities as the Premier of NSW. I have worked with her extremely closely, and she has always been a vibrant spirit when it comes to our debates, doing the best for the people of NSW,” Mr Morrison said.

“I know how much she is trusted and respected by the people of NSW, and I have no doubt that Gladys will always conduct herself in a way that serves the integrity of the office that she has held, and I know how seriously she takes that trust.

“I’ve always found Gladys to be a person of the highest integrity. She has been a trusted friend and a very respected colleague.

“I wish her well if that is the case, and I know that the great work that she has done as NSW Premier throughout the course of this pandemic will be continued by her government, who will be a great partner of the Federal Government in ensuring we move the country forward.” 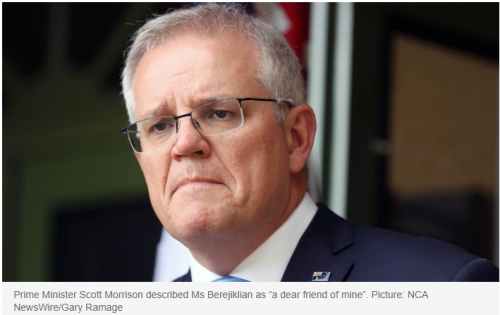 Shortly before Ms Berejiklian’s announcement, the ICAC announced its Operation Keppel inquiry will sit from Monday, October 18 with a focus on Ms Berejiklian.

The investigation relates to the allegations surrounding her secret romantic relationship with disgraced former MP Daryl Maguire and whether she knew anything that should have been reported to corruption authorities earlier.

In a statement today, the ICAC confirmed it will hold a further public inquiry in Operation Keppel from 10am on Monday, October 18, 2021.

ICAC confirmed it is investigating whether, between 2012 and 2018, the Hon Gladys Berejiklian MP engaged in conduct that:

• “constituted or involved a breach of public trust by exercising public functions in circumstances where she was in a position of conflict between her public duties and her private interest as a person who was in a personal relationship with the then NSW Member of parliament, Mr Daryl Maguire.” 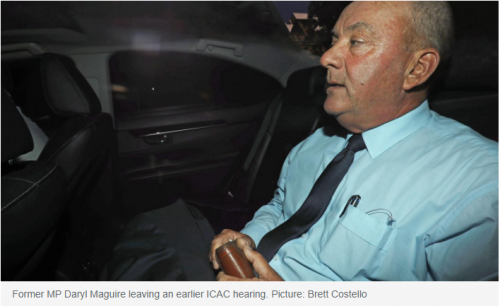 The investigation will probe the following issues:

• grant funding promised and/or awarded to the Riverina Conservatorium of Music in Wagga Wagga in 2018; and/or constituted or involved the dishonest or partial exercise of any of her official functions and/or a breach of public trust by refusing to exercise her duty pursuant to section 11 of the Independent Commission Against Corruption Act 1988 to report any matter that she suspected on reasonable grounds concerned or may concern corrupt conduct in relation to the conduct of Mr Daryl Maguire; and/or was liable to allow or encourage the occurrence of corrupt conduct by Mr Maguire. 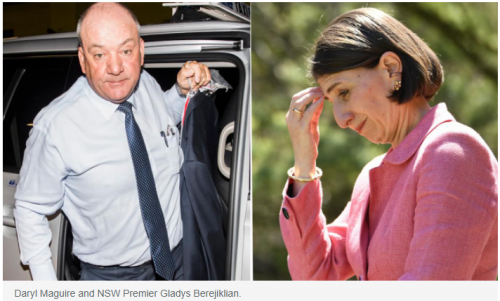 Just weeks ago, the NSW Premier brushed off questions over whether the ICAC probe was the reason why she was cancelling daily Covid press conferences after a reporter asked: “Is the reason we will see you less at the 11am conferences because you have been called to the ICAC?”

“Gosh,” Ms Berejiklian said. “I wish you would all be privy to the conversations we all had about the 11am press conferences; this is all about making sure that we provide good government to the people of New South Wales.”

The Commission is also investigating whether, between 2012 and August 2018, Mr Maguire engaged in conduct that involved a breach of public trust by using his public office, involving his duties as a member of the NSW parliament, and the use of parliamentary resources, to improperly gain a benefit for himself, G8wayInternational/G8wayInternational Pty Ltd and associated persons,’’ ICAC said.

“The general scope and purpose of the public inquiry is to gather evidence relevant to the matters being investigated for the purpose of determining the matters referred to in section 13(2) of the ICAC Act,’’ ICAC said in a statement.

Assistant Commissioner the Hon Ruth McColl AO SC will preside at the public inquiry. Counsel Assisting the Commission will be Mr Scott Robertson and Mr Alex Brown.“It is expected that the inquiry will continue for approximately 10 days,’’ a spokesman said.

“A witness list for the first week of the public inquiry will be published closer to the commencement date of the proceedings, along with further information about how to access the live stream. The Commission will also advise if there are changes to the public health orders that may affect the conduct of the inquiry.”
images/ondertekening.jpg
Omhoog
Plaats reactie
1 bericht • Pagina 1 van 1