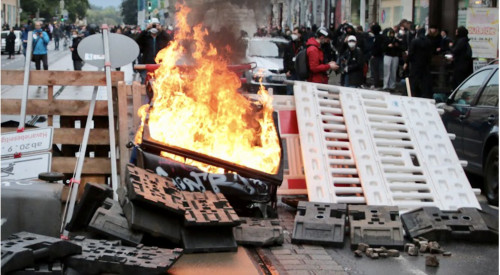 Between 3000 and 5000 violent “Antifa“ hoodlums took to the street in Leipzig, Germany Saturday to hurl rocks and Molotov cocktails, erect burning road blocks, call for the killing of the police chief, and demand the release of one of their fellow terrorists.

The Black Block mob called for the release of fellow criminal Lina E., who is on trial for eight counts of assault.

Radical “Anti”-Fascists threatened the chief of police with a banner reading “Your dream is over – You’ll be lying in a trunk soon”, a reference to the assassination of business leader Hanns Martin Schleyer 1977 by the Red Army Faction.

7 police officers were injured. Andy Ngo, author of bestseller “Unmasked”, documented what is believed to be one of the largest Antifa gatherings ever: