Disney World Employees March Against Vaccine Mandates Inside the Park
By Cassandra Fairbanks
Published September 18, 2021 at 7:30am 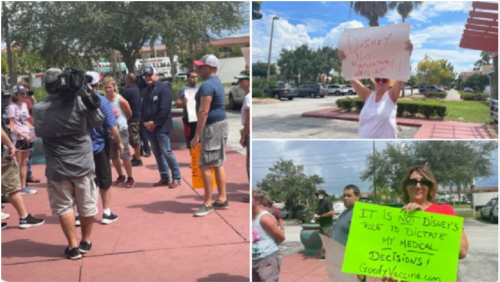 Dozens of Disney World employees, fondly known as “cast members,” marched inside the park to protest the company’s vaccine mandate on Friday.
The deadline for employees to be vaccinated, or lose their jobs, is on Saturday.

Nick Caturano, the organizer of the protest, said that he and his fellow cast members are “resisting the forced vaccinations for a variety of reasons including health concerns, religious beliefs, natural immunity, and a principled commitment to maintaining control over their own health care.”

Caturano has worked at the park for 16 years and has now launched the website GoofyVaccine.com to appeal to Disney and provide resources for their 60,000 other employees.

“We understand that COVID-19 is a very real health concern that we all have to take seriously,” Caturano told Fox 35 Orlando, “but many cast members have a legitimate basis for refusing vaccination.”

“So many cast members felt alone and felt like they were the only ones who thought this was wrong,” Caturano continued. “I think we were made to feel that way on purpose. But we have connected now, and we are pushing back.”

Caturano explained that “people feel really strongly against it, but they also love their jobs at Disney and don’t want to lose them.”

He hopes the company will consider a moratorium of 60 days, “so that we can reevaluate, and we can make an informed decision… rather than a rash, emotional, fear-driven decision, which is what I feel this is,” he said.
images/ondertekening.jpg
Omhoog
Plaats reactie
1 bericht • Pagina 1 van 1