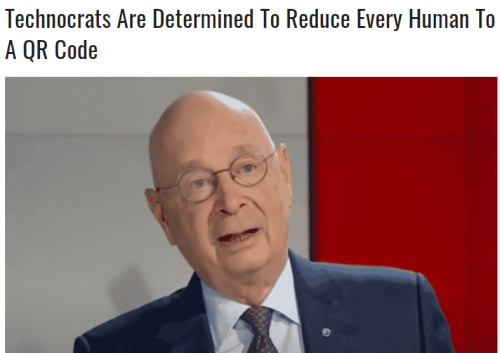 Technocracy’s coup d’etat, in full swing, fully intends to flip the world into a Scientific Dictatorship where every human will be tracked, monitored and managed from cradle-to-cradle. The documentation about this is readily available and very clear. The only question is whether citizens will resist or not. ⁃ TN Editor
Without fanfare and with hardly a peep from the corporate-owned establishment media, the United Nations World Health Organization, also known as the WHO, issued a document last week that should set off alarm bells for lovers of freedom and liberty everywhere.

The document provides “guidance” for every nation in the world on how to go about implementing digital health passports, which is something Bill Gates, Klaus Schwab and other power elites have said since last year would be absolutely essential to conquering the Covid pandemic.

The title alone of the document appears designed to repel the average reader and lull them to sleep: Digital documentation of COVID-19 certificates: vaccination status: technical specifications and implementation guidance.

The WHO is working with the U.S. Centers for Disease Control, or CDC, “to produce a high-value standard for international adoption and technical information exchange.” In layman’s terms, we’re talking about a digital health passport. These passports, as we’ve covered in depth in previous articles, are meant for no other purpose than to track and trace the movement of people in real time, scooping up data all along the way.

In other words, one of the most basic rights in any free society, the freedom of movement, will be shattered if your city, state or nation follows the advice of the WHO, the World Economic Forum, or any of its tech partners such as Microsoft, Google, Facebook, etc.

The WHO paper states its purpose is to provide standards and specs for the governments and contractors seeking to impose digital vaccine passports on global populations.

“This is a guidance document for countries and implementing partners on the technical requirements for developing digital information systems for issuing standards-based interoperable digital certificates for COVID-19 vaccination status, and considerations for implementation of such systems, for the purposes of continuity of care, and proof of vaccination.”

A condensed version of the 99-page document, with helpful graphics, some of which are reproduced below, can be found here. 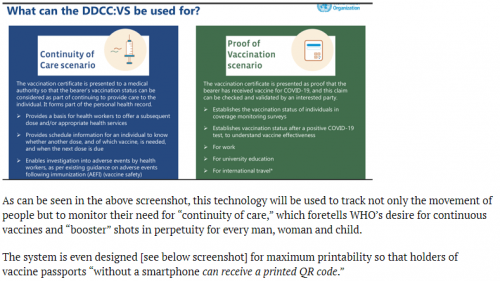 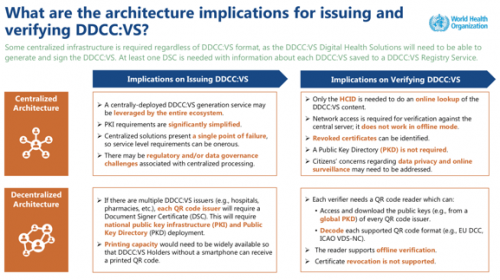 The document was issued August 27 with the intended audience being WHO-member states and technology contractors with a stake in the digital passport business, where tech companies stand to reap billions in profits over the next several years installing this new surveillance grid.

This document talks about the need to implement digital vaccine passports throughout the whole of society and how to do it.

“Vaccination records can also provide proof of vaccination status for purposes not related to health care,” the WHO points out on page 14.

A digital vaccine certificate is defined in the document as “a digitally signed representation of data content that describes a vaccination event.”

If governments and their tech partners are successful in implementing this system and getting the public conditioned to accept it, the next step, already envisioned by the World Economic Forum, is to move the QR code from the smartphone to the person’s actual body.

Klaus Schwab, director and founder of the WEF, which hosts the world’s top political and economic power players each year in Davos, Switzerland, said in 2016 while promoting his book on the Fourth Industrial Revolution, that this global revolution will “lead to a fusion of our physical, biological and digital identities.”

Schwab is fond of saying that Covid and the so-called “Great Reset” announced by the World Economic Forum in July of last year, will force people to engage with machines in new and different ways.

He wasn’t kidding. Listen to Schwab in the video clip below predicting that in this process of fusion, people will, by 2026, have a chip implanted in their skin or brain that will connect them to the Internet.

Schwab’s book, published in late 2016, stated that the time was near when developments in technology would not only “change the way we live and work” but would be “even challenging ideas about what it means to be human.”

Of course there is a segment of the population, worldwide, who Schwab, Gates, Fauci, Rockefeller, Soros, Buffet and the rest of the elites know will never get on board with their plan for changing the very idea of what it means to be human.

That’s where the rollout of the controversial mRNA Covid shots has been extremely valuable to the strategists behind the new world order. They are getting a very good feel for exactly who they will need to either re-educate or, if that’s not possible, eliminate from society altogether.

That’s where the digital certificates/passports come in. They are by their very nature coercive, an obvious, in-your-face assault on basic human freedom. Anyone who accepts such an intrusion on their movement and privacy is clearly already primed for the ultimate “marking” of the new world order, which will be to accept the QR code marked right onto their skin using invisible dye. Gates has already funded a project at MIT to do just that.

The WHO document also mentions that once established these digital certificates could be loaded with data that includes not just Covid vaccine status but all vaccines and health records. The ultimate goal is to have a global identification system that is mated to one’s vaccine status, a dream that the Gates and Rockefeller foundations have been striving to fulfill since their launch of the ID2020 initiative in 2019, before Covid was a thing.

In fact, the slippery slope toward making every man, woman and child a walking QR Code is already being traversed worldwide.

Scannable QR Codes allowing employers, businesses and other organizations to see your vaccination status and decide whether to allow you onto their property are already making their way into several states and cities across the U.S., and throughout Europe.

The ‘show your papers’ society is emerging before our eyes and very few Americans seem concerned, or even aware.

A company called MyIR Mobile is working in several states, providing an app that allows the user “to prove your Covid status for travel, school, work, or any other situation where proof is required. Simply register your account and open the QR Code in your app to allow others to scan your proof of vaccination.”

The screenshot below is just one of the technocratic bombshells that can be found on MyIR Mobile’s website. 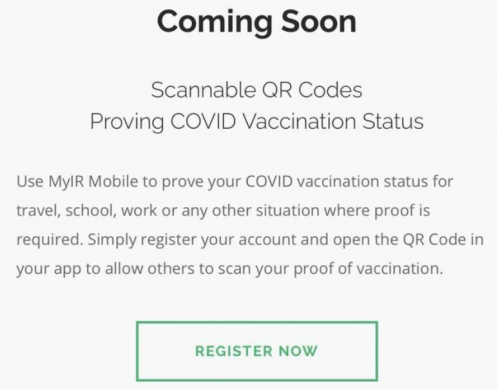 In true dystopian fashion, this company trumpets its “show your papers” app as if it was a great achievement, like how did humanity ever get by for thousands of years without having a scannable QR code phone app that allows them to be tracked and traced, to have their mere presence at a public location questioned and challenged, as if they were someone’s property? A dog on a leash has more freedom than this, but still you’re encouraged to “register now.” It’s “simple and secure.”

This is classic case of a technology company committing digital terrorism against humanity.

There is no other way around it. This is the digital form of Nazi Germany’s “show your papers” society, announcing itself as having arrived in the Home of the Brave and Land of the Free. It’s no longer hiding. It’s right in our faces.

The premise behind MyIR Mobile is clear: Either get vaccinated or your life is over. It is just one of dozens of such tech companies seeking to cash in on the fear-crazed “new normal” that globalist elites have created in the wake of the Covid pandemic.

They are using the power of technology for the utmost evil, to literally cancel you from all of society.

This is the global technocrats getting their foot in the door of a place they have no business being – your personal healthcare – and claiming they have the right to convince every business to discriminate against you based on your so-called “vaccine status,” which has nothing at all to do with whether or not you are healthy or a danger to others.

Those who can’t prove they have that status will not only be discriminated against but the government will incentivize businesses to discriminate against them.

The Civil Rights movement was fought and won over this same type of legalized discrimination.

Wars have been fought over far less.

Globalist elites love to play the Hegelian dialectic: A crisis [real or manufactured] provokes a reaction from the people, who demand the government take action to protect them, and then the horrifying solution is brought forth.

And it’s not going to stop with digital vaccine passports.

This is merely the first stop on the way to creating a digital ID that will be required of all “global citizens” in order to be allowed to buy or sell. It will start with your vaccination status and eventually include data points allowing the government and corporate world to know everything about you in a single glance.

Some will recognize these societal changes as tyranny and balk at the transformation.

That’s why it’s critical to get all of the children into the system. Fauci and company are frantically pushing the vaccine for children 11 and under. They already have it for those 12 to 18. They want this so young people will grow up thinking it’s normal to be asked to prove one’s vaccination status before being allowed to enter public venues and businesses. It has nothing to do with health and everything to do with putting in place the structures of a new surveillance state where every human being will be tracked and traced 24/7 in real time.

Do as you are told, or prepare to hibernate inside your home for the rest of your life, unable to work, shop for food, travel anywhere, go anywhere.

If you aren’t comfortable in such a world, prepare to resist.
images/ondertekening.jpg
Omhoog
Plaats reactie
1 bericht • Pagina 1 van 1