Chris Wallace Says He Deliberately Kept Election Deniers Off His Show Because ‘I Don’t, Frankly, Wanna Hear Their Crap’
By Ken MeyerSep 9th, 2021 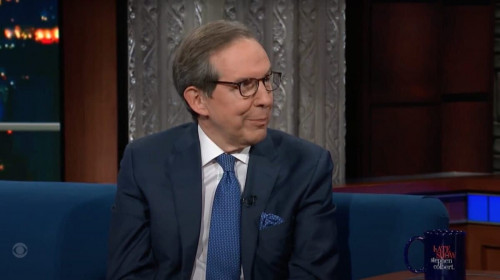 Fox News Sunday anchor Chris Wallace says he has purposefully kept certain people off of his show because he’s not interested in their 2020 election denialism “crap.”

Wallace joined Stephen Colbert Wednesday night on The Late Show to promote Countdown Bin Laden, his new book on the backstory of the mission that took out terrorist mastermind Osama bin Laden. During the conversation, Colbert asked Wallace if he had any reservations about having people on his show who falsely claim the 2020 election was “stolen.”

Colbert gave Wallace credit for pushing back on people who’ve advanced that false claim, but he asked “have you ever seen anything so cynical in Washington D.C. than people saying things they know aren’t true, that they know has to have lasting damage to our democracy?”

“I have never seen this,” Wallace answered. He added that he believes most election-denying lawmakers in Congress aren’t “delusional,” but rather, have cynically chosen to appease the Donald Trump base and “say something you know is not true.”

In the past, Wallace has spoken against the idea of outright banning election fraud conspiracy pushers from TV. He defended that view to Colbert, saying “if I’m gonna have them on, I’m gonna hold them to account over and over” on whether they recognize Joe Biden as the legitimately-elected president.

Colbert kept on this point as he asked Wallace if he is concerned that he’s giving credibility to election deniers by letting them come on his show and advance their lies.

“Does it worry you that you give legitimacy to people who have abdicated all public responsibility?” Colbert asked.

There are plenty of people who were the leaders in the Congress of challenging [the election] that I just have not had on the show ever since then, and have purposefully not had on the show, because I don’t frankly wanna hear their crap. But having said that, there are some leaders that you have to ask them questions. There are people in leadership and the Senate and I won’t let them come on without putting them through the wringer.
images/ondertekening.jpg
Omhoog
Plaats reactie
1 bericht • Pagina 1 van 1