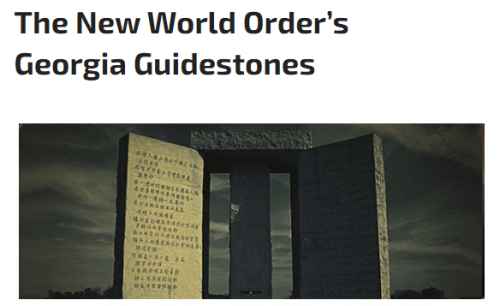 The Georgia Guidestones is a mysterious monument on which are carved ten “commandments” for a “New Age of Reason.” The first commandment? Maintaining the world population under 500 million people.

Another sinister fact: the authors of what we now call the American Stonehenge are still a “mystery”… except for those in the know. Among the numerous features of this monument, its message calling for a New World Order and explains how it is the work of an occult secret society.

The Georgia Guidestones is an enigmatic granite monument situated in Elbert County, Georgia. Also known as the American Stonehenge, the gigantic structure is almost 20 feet high and is made of six granite slabs, weighing in total 240,000 pounds. The most astonishing detail of the monument is however not its size but the message engraved on it: Ten Rules For An “Age of Reason.” These guides touch upon subjects that are associated with the “New World Order,” including massive depopulation, a single world government, the introduction of a new type of spirituality, etc. The author of those rules has requested to remain totally anonymous. The purpose behind the Guidestones becomes very clear, leaving little room for hypotheses. The Guidestones describe the ideal world, as envisioned by occult Secret Societies. The monument is, therefore, proof of an existing link between secret societies, the world elite and the push for a New World Order. 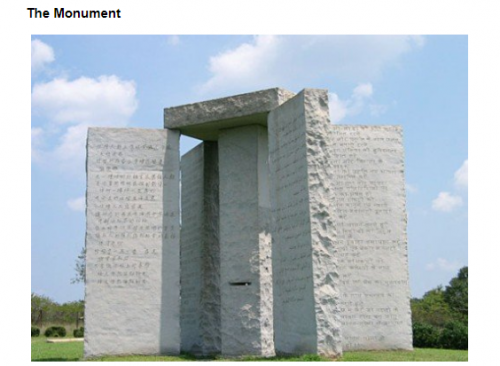 Made of Pyramid blue granite, the Georgia Guidestones are meant to withstand the test of time and to communicate knowledge on several levels: philosophically, politically, astronomically, etc. It consists of four major stone blocks, which contain ten guides for living in eight languages: English, Spanish, Swahili, Hindi, Hebrew, Arabic, Chinese, and Russian. A shorter message is inscribed at the top of the structure in four ancient language scripts: Babylonian, Classical Greek, Sanskrit, and Egyptian hieroglyphs. It is important to note that those last four ancient languages are of a great importance in the teachings of occult mystery schools, such as the Freemasons and the Rosicrucians.

The four major stones are arranged in a giant “paddlewheel” configuration which is oriented to the limits of the migration of the sun during the course of the year and also shows the extreme positions of the rising and setting of the sun in its 18.6-year cycle. The center stone has two special features: first, the North Star is always visible through a special hole drilled from the South to the North side of the center stone; second, another slot aligns with the positions of the rising sun at the time of the summer and winter solstices and at the equinox. 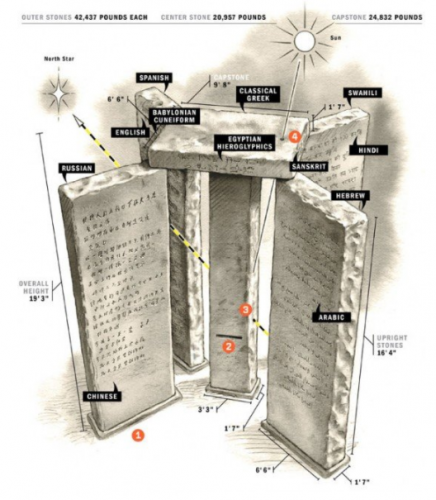 At the base of the Guidestones lies an explanatory tablet listing some of the details of the structure. It also mentions a time capsule buried underneath it. The contents of this time capsule (if it exists) are a total mystery

Astronomical features are of a great importance in the design of the Guidestones. In a relatively “new” nation such as the United States, monuments that are aligned with celestial bodies are often the work of secret societies, such as the Freemasons. Drawing their teachings from the Mystery schools of Ancient Egypt, Greece or the Druidic Celts, they are known for embedding into monuments some of their “sacred knowledge”.

The New World Order’s 10 Commandments – on stone even!
The ten guides for a new Age of Reason are as follows:

As you can see, the guidelines call for a drastic reduction of the world population, the adoption of a world language, the creation of a world court and vague allusions to eugenics. In other words, a blueprint for a New World Order.

The first “commandment” is particularly shocking, since it basically stipulates that 12 out of 13 people on Earth should not exist. If today’s world population is 6.7 billion, then that is a 92.54% surplus. To consider these figures is mind-boggling. The earth’s wealthiest people would remain. Is this predictive programming?

Massive depopulation is an admitted goal of the world’s elite and many important people have openly called for it:

In 1988, Britain’s Prince Philip expressed the wish that, should he be reincarnated, he would want to be “a deadly virus” that would reduce world population. Bill Gates said “The world today has 6.8 billion people … that’s headed up to about 9 billion. Now if we do a really great job on new vaccines, health care, reproductive health services, we could lower that by perhaps 10 or 15 percent.” Along with tax-deductible donations of enormous amounts of money to help the depopulation cause, “secret meetings” of the world’s elite have been taking place to discuss those issues:

“Some of America’s leading billionaires have met secretly to consider how their wealth could be used to slow the growth of the world’s population and speed up improvements in health and education. The philanthropists who attended a summit convened on the initiative of Bill Gates, the Microsoft co-founder, discussed joining forces to overcome political and religious obstacles to change.

Described as the Good Club by one insider it included David Rockefeller Jr, the patriarch of America’s wealthiest dynasty, Warren Buffett and George Soros, the financiers, Michael Bloomberg, the former mayor of New York, and the media moguls Ted Turner and Oprah Winfrey.”

The second rule (“Guide reproduction wisely – improving diversity and fitness”) basically calls for the inference of lawmakers into the management of family units. If we read between the lines, it requires to the creation of laws structuring the number of children per family. Furthermore, “improving diversity and fitness” can be obtained with “selective breeding” or the sterilization of undesirable members of society. This used to be called “eugenics”until it became politically incorrect because of the Nazis.

“Some even believe we are part of a secret cabal working against the best interests of the United States, characterizing my family and me as ‘internationalists’ and of conspiring with others around the world to build a more integrated global political and economic structure – one world, if you will. If that’s the charge, I stand guilty, and I am proud of it.” -David Rockefeller, “Memoirs of David Rockefeller” p.405

Most of the other rules of the Guidestones basically call for the creation of a world government, ruled by an “enlightened few,” who would regulate all aspects of human life, including faith, social duties, economy, etc. This idea is far from new, as it has been entertained by Mystery schools for centuries. Manly P. Hall wrote in 1917:

“When the mob governs, man is ruled by ignorance; when the church
governs, he is ruled by superstition; and when the state governs, he is
ruled by fear. Before men can live together in harmony and understanding, ignorance must be transmuted into wisdom, superstition into an illumined
faith, and fear into love. Despite statements to the contrary, Masonry is
a religion seeking to unite God and man by elevating its initiates to that
level of consciousness whereon they can behold with clarified vision the
workings of the Great Architect of the Universe. From age to age the
vision of a perfect civilization is preserved as the ideal for mankind. In the
midst of that civilization shall stand a mighty university wherein both the
sacred and secular sciences concerning the mysteries of life will be freely
taught to all who will assume the philosophic life. Here creed and dogma
will have no place; the superficial will be removed and only the essential be preserved. The world will be ruled by its most illumined minds, and each will occupy the position for which he is most admirably fitted.”
– Manly P. Hall, The Secret Teachings of All Ages

In “The Secret Destiny of America,” Hall explains the ancient dream of a world government, as entertained by Secret Societies:

“World democracy was the secret dream of the great classical philosophers. Toward the accomplishment of this greatest of all human ends they outlined programs of education, religion, and social conduct directed to the ultimate achievement of a practical and universal brotherhood. And in order to
accomplish their purposes more effectively, these ancient scholars bound themselves with certain mystic ties into a broad confraternity. In Egypt, Greece, India, and China, the State Mysteries came into existence. Orders of initiated priest-philosophers were formed as a sovereign body to instruct, advise, and direct the rulers of the States.”
-Manly P. Hall, The Secret Destiny of America

So who was is this “small group of Americans who seek the Age of Reason?” Although their identity is secret, they have left some telling clues to the initiates, unmistakably pointing towards the occult nature of their group. We can find references to “As Above, So Below.” The celestial alignments of the stones symbolize the need for humanity to be square with External principles which are manifest in our own nature, and in the universe around us, and to duality -We are the major agency through which good and evil qualities of the spirit become actors in our world. Without us there is very little of love, mercy, or compassion. Yet we can also be agents of hate, and cruelty and cold indifference. This text alone provides enough proof to conclude that the authors are either Freemasons, Rosicrucians or another hermetic Secret Society.

The Georgia Guidestones are a modern day manifesto calling for (or announcing) a drastic change in the way the world is managed. The monument is of a great importance in the understanding of the forces covertly shaping today and tomorrow’s world. It materializes into stone the crucial link between secret societies, the world elite and the agenda for a New World Order. The push for a world government, population control and environmentalism are issues that are today discussed on a daily basis in current events. They were not in 1981, when the Guidestones were erected. Can we say that great progress has been made?

Many of the rules of the Guidestones make sense for the preserving of Earth on a long-term basis. But between the idealistic words of the Guidestone’s authors and the actual way these policies would be applied on the masses – by power-hungry and greedy politicians – there is a world of difference. Reading between the lines, the Guidestones require from the masses the loss of many personal liberties and to submit to heightened governmental control on many social issues … not to mention the death of 92.5% of the population …and probably not those of the “elite.” Is the concept of a democracy “by and for the people,” as idealized by the Founding Fathers a mere illusion, a temporary solution until the introduction of socialist world government? Why are the world’s citizens not being consulted in a democratic matter? I guess it is easier for the elites to manufacture consent through mass medias. But maybe it won’t work on everybody…
images/ondertekening.jpg
Omhoog
Plaats reactie
1 bericht • Pagina 1 van 1