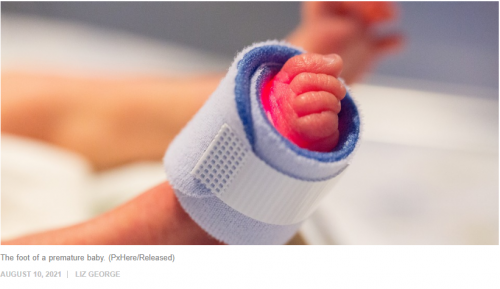 The Department of Health and Human Services (HHS) has provided at least $2.7 million to fund a University of Pittsburgh effort to collect organs from full-term aborted babies as old as 42 weeks that may have been alive, HHS documents released by Judicial Watch last week revealed.

According to the documents, the harvested organs of aborted babies were part of a university project called the GenitoUrinary Development Molecular Anatomy Project, or GUDMAP. The university requested additional funding for the project, but it is unclear how much it received.

The documents show the University of Pittsburgh sought to “develop a pipeline to the acquisition, quality control and distribution of human genitourinary [urinary and genital organs and functions] samples obtained throughout development (6-42 weeks gestation).” The National Institute of Health classifies a baby’s development as full-term at 40 weeks, while 42 weeks deemed “post-term” or “overdue.”

The university says samples are taken from living and deceased subjects, specifically saying the samples are taken “both from surgical pathology specimens (products of conception) as well as autopsy material (still-births).” It lists “labor induction” as “a procedure that will be used to obtain the tissue.”

“We record the warm ischemic time on our samples and take steps to keep it at a minimum to ensure the highest quality biological specimens,” the university said.

Warm ischemic time refers to the body parts remaining at body temperature after reducing or cutting off their blood supply, according to the National Institutes of Health. Taking samples at a “warm ischemic time” indicates the body is still warm, though it’s unclear whether this collection method means the heart is still beating or not.

“If the fetus’ heartbeat and blood circulation continue in a labor induction abortion for harvesting organs, it means the fetus is being delivered while still alive and the cause of death is the removal of the organs,” a press release from the Center for Medical Progress explained. Abortion procedures often use digoxin to cause “fetal demise,” and in conjunction with a dismemberment approach, can make tissue intended for donation unusable.

The university also told the HHS in 2015 that it had already been “collecting fetal tissue” for more than a decade, including “liver, heart, gonads, legs, brain, genitourinary tissues including kidneys, ureters and bladders.”

U.S. Senate candidate Sean Parnell of Pennsylvania, called for an investigation into the University of Pittsburgh on Thursday, saying, “If these allegations are true that scientists at the University of Pittsburgh were harvesting kidneys of unborn babies while their hearts were still beating, they should not only have their taxpayer funding immediately suspended, everyone involved should face criminal charges.” 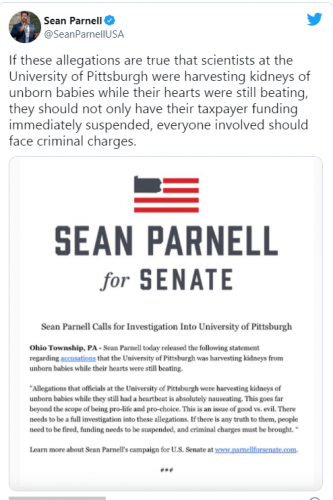 The University of Pittsburgh told Fox News that a large number of minority organs were harvested due to the focus on how minority populations are impacted by kidney disease.

“Projects funded by the National Institutes of Health must ensure appropriate inclusion of women and minorities,” said David Seldin, assistant vice chancellor for news. “They should also ensure distribution of the study reflects the population needed to accomplish the scientific goals of the study. Asked another way: Does the makeup of the study reflect the populations affected by the illness in question? In the case of the GUDMAP Tissue Hub, one of the goals is to support researchers looking for treatments and cures for kidney disease.”

In one interview with PureFlix last year, former university staffer Lori Kelly highlighted a federally funded program that involved researchers looking for the bladders and kidneys of babies 24 weeks into development. As project manager, Kelly said she helped develop “a pull-down menu of baby body parts for researchers to choose from to submit to the tissue bank, so that we could send the body parts to them.”

“And these researchers were all across the United States from Florida to California,” she claimed.

The University of Pittsburgh and the medical center therein have both denied any misconduct.

“The University of Pittsburgh complies with rigorous regulatory and ethical oversight of fetal tissue research,” Paul Supowitz, the university’s vice chancellor, said according to Fox. “The researchers in this matter followed all applicable federal and state guidelines and regulations (with Pennsylvania having one of the most restrictive set of requirements in the nation), as well as strict protocols approved by the University. The University’s Institutional Review Board approved the acquisition of stem cells.”

The NIH echoed the university’s defense, telling Fox that it is “committed to ensuring that research involving human fetal tissue is conducted responsibly and meets the highest ethical standards.”

In May, Pennsylvania state lawmakers held a hearing that included discussions on experiments which involved grafting fetal scalps that have “full-thickness human skin” onto rodents.

The project used tissue collected through the university’s human tissue bank and was largely funded through grants from the National Institute of Allergy and Infectious Diseases, headed by White House Chief Medical Advisor Dr. Anthony Fauci.

“The NIH grant application for just one of Pitt’s numerous experiments with aborted infants reads like an episode of American Horror Story,” said David Daleiden, a journalist who testified before the Pennsylvania legislature at the hearing earlier this year. “People are outraged by such disregard for the lives of the vulnerable. Law enforcement and public officials should act immediately to bring the next Kermit Gosnell to justice under the law.”

The university had again defended its use of tissue from aborted babies, calling it “important” for combating disease, in May.

“Researchers at Pitt and other leading medical research institutions use fetal tissue in certain instances because it has proven to be an important method for combatting and curing some of our most devastating diseases, including ALS, Parkinson’s disease, Alzheimer’s disease, spinal cord injury and others,” the university said in a statement to Fox News.
images/ondertekening.jpg
Omhoog
Plaats reactie
1 bericht • Pagina 1 van 1