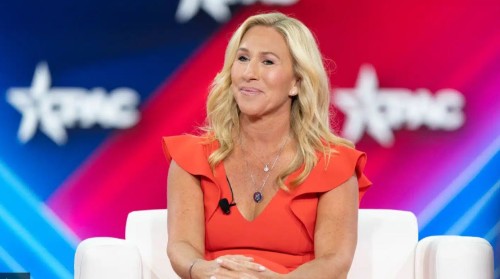 Rep. Marjorie Taylor Greene believes it’s time for Congress to move against the left-wing group known as Antifa following a protest that turned into a riot in Atlanta over the weekend, where participants damaged property and torched at least one police vehicle.

In an appearance on Tucker Carlson’s program Monday evening, the Georgia Republican told the Fox News host she would be introducing legislation to declare the group a domestic terrorist organization.

To open the segment, Carlson referenced what many believe was an Antifa-led protest that turned into another riot in the city, during which participants caused damage to private property and torched a police vehicle. Newsweek reported that the “suspects are facing multiple misdemeanor and felony charges, including domestic terrorism.”

Carlson called members of the group “the biggest armed militia in the United States” that few Americans know much about because the major media organizations have so far refused to investigate the group and report on its activities since “they are aligned with the Democratic Party” before bringing in Greene.

“I think, honestly, America is sick and tired of Antifa,” she began. “Antifa is the ground troops of the Democrat party … They never get prosecuted. That’s because, well we know the truth, it’s the Democrats in control.”

“Well, it’s time to do something about Antifa,” she continued. “That’s why I’m going to introduce legislation to declare Antifa domestic terrorists. Because they need to be taken apart. We need to investigate exactly who they are, who funds them.”

She also said that the group’s supporters “defend Democrat causes,” including what she said were “the drag queens targeting our children with Drag Queen Story Time.”

Greene also noted that due to their behavior, members of the group are not actually “anti-fascists” like they claim but “the fascists.”

Greene recently spoke about the “Holman rule” and urged Republicans to impeach Attorney General Merrick Garland as well as block the use of taxpayer money for a special counsel to probe former President Donald Trump.

Greene called on the GOP to “refuse to appropriate any funding to Merrick Garland’s Special Counsel and defund any part of the DOJ acting on behalf of the Democrat party as a taxpayer-funded campaign arm for the Democrat’s 2024 presidential nominee.”

In a tweet detailing the plan, Greene said that current House Minority Leader and likely next House Speaker Kevin McCarthy would deny funding to the Department of Justice special counsel investigating Trump. Greene said McCarthy would invoke the rule, which is a procedural measure by which the House may adjust appropriations legislation to reduce the salary of or fire specific government employees. They may also use it to cut specific programs.

“Holman Rule. Look it up! [McCarthy] is going to put it in place,” Greene wrote. “That means no money for Garland’s politically weaponized Special Counsel. Don’t promise too many jobs! Whoops defunded.”

New York Democrat Rep. Ritchie Torres took to the House floor earlier this month to complain that Republicans were considering resurrecting the rule to include language in appropriations bills that “can rearrange an agency or slash specific positions or salaries.”

“But the rule could also be used to target an individual over ideological differences, or say a special counsel, like the one overseeing the Justice Department’s investigation into the presence of classified documents at former President Donald Trump’s Florida estate. Of course, the Democratic-led Senate would have to go along for any such rescissions to take effect, which is highly unlikely,” the Associated Press reported.

“The House Freedom Caucus even specifically named Dr. Anthony Fauci in calling for the rule’s reinstatement. Fauci served as director of the National Institute of Allergy and Infectious Diseases from 1984 to 2022, and his efforts to mitigate the damage from COVID-19 clashed with the views of some conservatives closely aligned with former President Donald Trump,” the AP noted further.