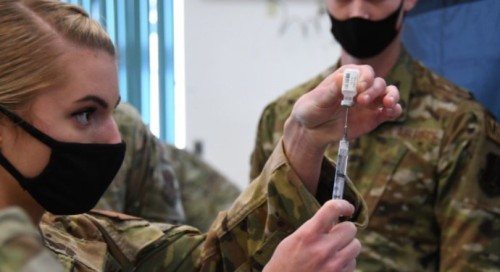 The Biden administration is a disgrace.

U.S. service members who got fired for refusing to comply with the Pentagon’s tyrannical COVID vaccine mandate are now being forced to pay back their signing bonuses.

He said that he was able to cover the amount he owed by selling unused vacation days. According to the service member, many didn’t have this same recourse to pay what they owed.

U.S. service members who were fired for refusing to comply with the Pentagon’s COVID-19 vaccine mandate are now being forced to pay back their original recruitment bonuses, which they tell Fox News Digital is a “kick in the face” after years of dedicating their lives to protecting the country.

One former Army soldier who was fired for refusing to get the COVID-19 vaccine last May told Fox News Digital that he would have to pay back his original signing bonus upon his termination from the military because he did not complete the commitment in his contract.

The soldier had signed a contract with the Army for six years and received a $7,000 bonus. However, because he fell short of the six years, the military notified him that he owed the government a prorated amount of slightly over $4,000. In order to pay it back, he ended up having to “sell” 60 of his unused vacation days to cover the amount owed.

He said that effects on his mental health have been extremely negative because the way he was treated by the military was a “final kick in the face.”

Another service member called this “another example” of the Department of Defense failing to make up for their wrongdoings.

He said if this continues “the recruiting and retention shortfalls will only continue.”

“The Department of Defense continues to fall short on reestablishing trust for wrongdoings, and this is yet another example of that,” another service member told Fox News Digital in an interview. He stated that the recoupment of signing bonuses is the “icing on the cake” of the Pentagon’s deplorable treatment of military members.

There is a lot of anger and resentment out there and with this kind of treatment of the military, it will likely only get worse.

“The appalling treatment these individuals endured broke the trust that is owed to our citizens and our volunteers. America’s sons and daughters,” the Army member bitterly remarked in a statement.

“Until true efforts are made to establish trust, the recruiting and retention shortfalls will only continue. The individuals who make public statements that they are unsure what has contributed to the current recruiting and retention shortfalls need to take a look in the mirror, and perhaps they should resign for the betterment of our nation,” he added.

A slap in the face to the brave men and women who serve our country.
images/ondertekening.jpg
Omhoog
Plaats reactie
1 bericht • Pagina 1 van 1