What is the Doomsday Clock? Everything you need to know about the Armageddon-predicting symbol, as scientists prepare to update it TOMORROW
Tomorrow, the Bulletin of the Atomic Scientists will set the Doomsday Clock
Scientists consider issues like nuclear war, climate change and political stability
For the last three years, it has been stuck on 100 seconds to midnight
By EIRIAN JANE PROSSER FOR MAILONLINE

Every January for the past 75 years, scientists have been keeping track of how likely the annihilation of humankind is.

Tomorrow, the Bulletin of the Atomic Scientists will reveal humanity's fate once again, deciding whether the Doomsday Clock needs to be moved closer to, or further away from midnight.

The clock is currently set at 100 seconds to midnight, where it has been for the last three years.

But following a year of environmental disasters, Vladmir Putin's ongoing war in Ukraine and the Covid-19 virus still causing issues, the clock could be set to inch closer to midnight. 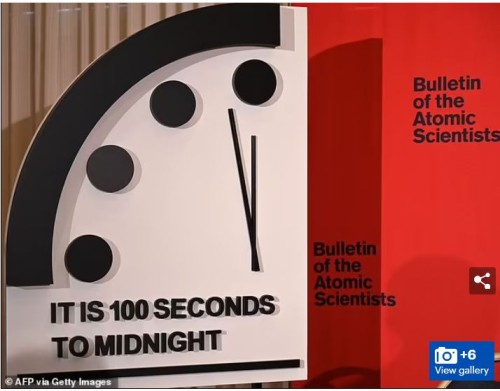 Tomorrow, the Bulletin of the Atomic Scientists will make its Doomsday Clock announcement at 3pm GMT (10am EST). The clock is currently set at 100 seconds to midnight, where it has been for the last three years

The Doomsday Clock was created in 1947 to warn humanity of the dangers of nuclear weapons.

Ever since, it has warned the public about how close we are to destroying our world with technology of our own making.

It serves as a metaphor to remind humankind of issues, such as climate change, Covid-19 and nuclear warfare, that need to be addressed.

Who created the Doomsday Clock?

The Bulletin of Atomic Scientists, which provides academic journals on science and global security issues, created the clock.

Artist Martyl Langsdorf was commissioned by co-editor Hyman Goldsmith to come up with a design for the June 1947 cover, that would 'frighten men into rationality', according to Eugene Rabinowitch, the first editor of the Bulletin of Atomic Scientists, who died in 1973.

Only hours in the last quarter before midnight are shown on the clock's face to reflect the urgency of impending catastrophes.

The Bulletin of the Atomic Scientists said on its website that Langsdorf initially considered using the symbol for uranium instead of the clock to issue a warning.

But after listening to scientists who had worked on creating the bomb, she sensed their need for urgency, so the clock was drawn to reflect that humanity did not have much time left under nuclear weapons.

What time was displayed on the original Doomsday Clock?

The clock was originally set to seven minutes to midnight because Langsdorf said, 'it looked good to my eye'.

'For 75 years, the Doomsday Clock has acted as a metaphor for how close humanity is to self-annihilation,' reads the Bulletin of Atomic Scientists' website.

'Since 1947, it has also served as a call-to-action to reverse the hands, which have moved backwards before.'

It then did not move for two years until the Soviet Union successfully tested its first atomic weapon.

At this point, the clock was reset to three minutes to midnight.

Who decides the time?

Shortly after it was first created, Bulletin Editor Eugene Rabinowitch decided whether or not the hand should be moved.

Rabinowitch was a scientist, fluent in Russian, and a leader in the conversations about nuclear disarmament, meaning he was in frequent discussions with scientists and experts all over the world.

How close has the clock been to midnight in the last 75 years?
The closer to midnight the Doomsday Clock moves, the closer humanity is to annihilation.

Since it was first set in 1947 it has moved backward eight times and forward 16 times.

This is how it has changed over the years: 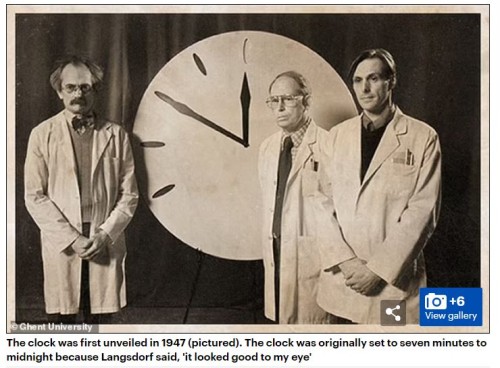 After considering his discussions, he would decide whether the clock should be moved forward or backward.

When he died in 1973, the Bulletin's Science and Security Board took over, made up of experts on nuclear technology and climate science.

This has included 13 Nobel Laureates over the years.

The panel meets twice a year to discuss ongoing world events, such as the war in Ukraine, and whether a clock reset is necessary.

When were the hands set closest to midnight?

The hands were set closest to midnight in 2020 after governments around the world were faced with 'two simultaneous existential dangers - nuclear war and climate change', according to the Bulletin.

These threats included political conflicts surrounding North Korea and Iran, as well as mass protests of young people around the world highlighting the need for government action on climate change.

Because of these threats, The Bulletin decided on January 23 2020 to set it to 100 seconds to midnight.

When were the hands furthest away from midnight?

In 1991, following the end of the Cold War, the Bulletin set the clock hands to 17 minutes to midnight.

The end of the war saw the US and the Soviet Union sign the Strategic Arms Reduction Treaty.

This means the countries would cut down their nuclear weapons arsenal, reducing the threat of nuclear war. 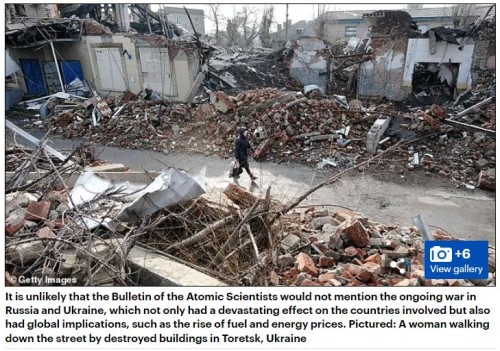 Since it was first mentioned as a threat in 2007, climate change has been a regular factor in whether the Doomsday Clock is moved forward or backward. This year we have seen devastating floods in Pakistan and in 2022, several severe heatwaves hit Europe and China.

In 2022, the Doomsday Clock remained at 100 seconds to midnight.

The Bulletin noted that while Joe Biden replacing Donald Trump as US President was a sign of hope, 'US relations with Russia and China remain tense'.

It added that while developed countries had got a grip on the Covid-19 pandemic, worldwide the response remained 'entirely insufficient', citing that poorer countries were being left largely unvaccinated.

Climate change was also a significant factor, noting that while COP26 in Glasgow was an 'important milestone' the results 'were insufficient'.

It gave examples of China and India only agreeing to a gradual move away from coal, meaning they would only reach net zero in 2060 and 2070.

It also said that developed countries failed to follow through on the treaty commitments to provide financial and technological support to poorer countries. 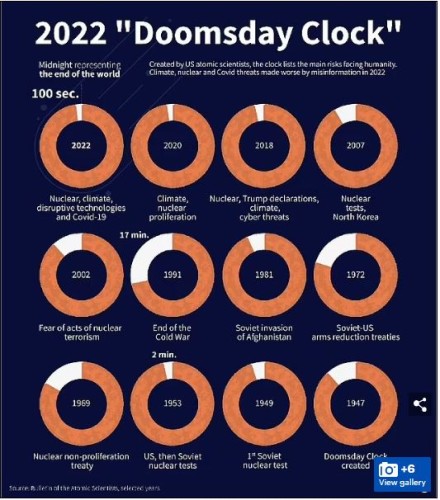 For 2023, the Bulletin said it would take into account the Russia-Ukraine war, bio-threats, proliferation of nuclear weapons, the continued climate crisis, state-sponsored disinformation campaigns and disruptive technologies

Scientists keep what time the clock will be moving to a secret until the day the clock resets, making it difficult to predict what it will be set to.

Since the 2022 clock was unveiled, the world has watched Russia invade Ukraine in an ongoing war on mainland Europe.

The war is having a significant effect around the world, highly impacting prices of fuel and energy.

There are also increased concerns about the threat of nuclear weapons being used by Russia, Iran and North Korea, with the latter firing the most ballistic missiles on record in 2022.

Kennette Benedict, a lecturer at the University of Chicago leading the nuclear threats section on The Global Challenges Foundation report, said nuclear risks from the war were greater than the Cuban Missile Crisis.

Perhaps one hint as to how much this year's doomsday statement will concentrate on the war in Ukraine, is that for the first time ever it will be translated into Russian and Ukrainian.

Climate change has also had significant effects worldwide in the last year, with floods submerging a third of Pakistan, dangerous heatwaves taking place in Europe and China, as well as crops failing to grow in the Horn of Africa.

For 2023, the Bulletin said it would take into account the Russia-Ukraine war, bio-threats, proliferation of nuclear weapons, the continued climate crisis, state-sponsored disinformation campaigns and disruptive technologies.

What time will it change tomorrow?

The Doomsday Clock announcement will be made at 3pm GMT (10am EST) tomorrow.

MailOnline will also be covering the announcement live.

More than five billion people would die of hunger during the fallout from a full-scale conflicts, researchers say, with computer simulations showing that firestorms would release soot into the upper atmosphere and block out the sun.

This would in turn spark crop failure across the world.

The modelling sheds fresh light on what would happen under six war scenarios — five smaller India-Pakistan conflicts and a large US-Russia war.

Such threat has been brought to the fore following Vladimir Putin's invasion of Ukraine.