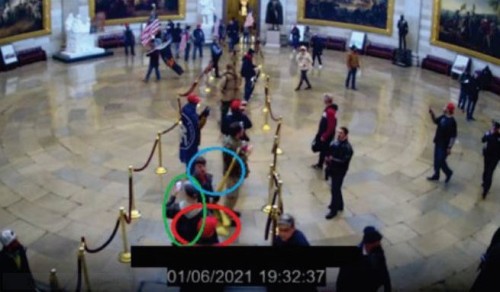 For the first time since May 2021, active duty military members have been arrested in connection to the January 6th, 2021 protest in Washington, D.C. The last arrest of an active duty military member was that of Marine Corps Major Christopher Warnagiris. Maj. Warnagiris was an artillery officer at the time of his arrest and has reportedly continued to work at the Training and Education command at the Marine base in Quantico, Va while released under his own recognizance.

The Marine Corps previously issued a statement regarding Maj. Warnagiris and, according to Military.com‘s brief segment they chose to post in their publication:

“Bigotry and racial extremism run contrary to our core values,” the statement added.

I’m sure there was more to this statement. A lot more. But this is what Military.com chose to publish. This deliberately selected statement is ironic because there is absolutely no mention whatsoever of “racial hatred,” “bigotry,” or “racial extremism” anywhere in Major Warnagiris’s charging documents, but the Marine Corps, my beloved Corps, has thrown the major under the bus with such a divisive, misleading statement that has absolutely nothing to do with anything he is charged with.

All three Marines, who were arrested more than two years after the attack, work in jobs connected to the intelligence community.

They were each charged with knowingly entering a restricted building, two counts of disorderly conduct, and parading or picketing inside the U.S. Capitol.

The three Marines allegedly spent just under an hour wandering about the Capitol, including inside the Rotunda. The charging documents notate that inside the Rotunda, they put “a red MAGA hat on one of the statues to take a photo with it.” The horror. 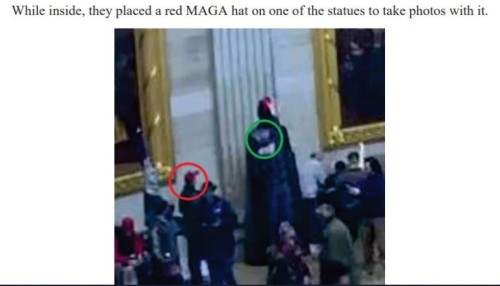 Corporal Coomer allegedly posted a picture to Instragram where he said “glad to be a part of history”. This picture and statement resulted in a search warrant for his social media accounts.

What if the three Marines didn’t “knowingly enter” because they didn’t find any barricades in place or were waived into the Capitol by Capitol Police, as hundreds or perhaps even thousands of others were?

How does the US Government justify a warrant to violate their 4th Amendment rights over a misdemeanor that numerous others have beaten in court? “Show me the man and I’ll show you the crime.” 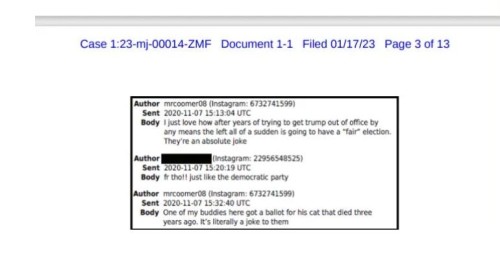 As if the Marine Corps and Military.com throwing Major Warnagiris under the bus for “racial hatred,” “bigotry,” and “racial extremism” wasn’t bad enough, Military.com has now done the same with these gentlemen:

In a chat with another Instagram user in the weeks after the siege, the court records say Coomer told an unidentified person “that everything in this country is corrupt. We honestly need a fresh restart. I’m waiting for the boogaloo.” When the other person asked what a “boogaloo” was, Coomer said “Civil war 2.”

The Boogaloo movement is broadly anti-government in nature but favors violence with the use of the term “boogaloo” typically slang for a future race war. However, some experts, like the Anti-Defamation League, have noted that “most boogalooers are not white supremacists, though one can find white supremacists within the movement.“

Here is the only mention of a “future race war” in the analysis by the hard left leaning ADL cited by Military.com:

“In particular, though white supremacists also used or promoted the use of the term “boogaloo” in 2019-20—including some accelerationist white supremacists who used it in the context of a future race war — for the most part they did not become part of the movement itself.“

So Military.com, who chose to use only a very specific segment of a Marine Corps statement that referenced “racial hatred”, “bigotry” and “racial extremism” to describe Major Warnagiris despite no such claims against the major, is now describing these three enlisted men as “boogalooers” who are trying to incite “a future race war,” despite the only individuals who used the term “future race war” were white supremacists who weren’t even a part of the movement.

Military.com should be ashamed of their unhinged, libelous reporting.