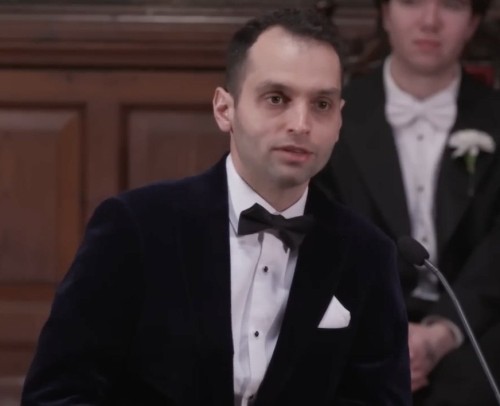 Russian British comedian Konstantin Kisin blasted woke culture in a speech at the Oxford Union Society in a debate titled, ” This House Believes Woke Culture Has Gone Too Far.”

His epic speech has gone viral with more than 9 million views.

“I’m tired of talking about woke culture. Free speech is not some right-week reframing of whatever — it’s the foundation of Western civilization,” Russian British comedian Konstantin Kisin recently told the Oxford Union Society.

“We know that the way to improve the world is to work, is to create, is to build, and the problem with woke culture is that it has trained too many young minds like yours to forget about that,” he added.

The video of the speech, posted to Kisin’s Twitter on Jan. 13, has been viewed over 9 million times as of Thursday. In it, he also discusses how many “woke” people suffer from climate anxiety — or fears over the consequences of climate change.

“I join you in this view. I truly do,” he noted, before adding: “Now, what are we to do about this huge issue facing humanity? What can we in Britain do?”

“We can only do one thing, you know why? This country is responsible for 2% of global carbon emissions, which means that if Britain was to sink into the sea right now, it would make absolutely no difference to the issue of climate change.”

The frequent satirist and podcaster went on to say that the future of the global climate will be decided “in Asia and Latin America, by poor people who couldn’t give a s–t about saving the planet.”

He then argued that those people do not care about saving the planet “because they’re poor,” specifically pointing to the 120 million people in China suffering from malnutrition.

So-called “woke culture” has trained so many young minds to forget how to solve issues, Kisin argued, noting the current generation is convinced the only way they can solve an issue is to “complain” instead of actually working on it.

“There is only one thing we can do in this country to stop climate change and that is to make scientific and technological breakthroughs that will create the clean energy that is not only clean but also cheap,” Kisin said.

“The only thing wokeness has to offer in exchange is to brainwash bright young minds like you to believe that you are victims, to believe that you have no agency, to believe that what you must do to improve the world is to complain, is to protest, is to throw soup on paintings,” he said, referencing anti-oil protesters who threw tomato soup at a Vincent Van Gogh painting in London’s National Gallery in October.

He told Carlson, “We live in a society in which adults are afraid of children and young people in particular. And so when you see somebody who is an adult talking to young people and being straight with them and saying, ‘Look, if you care about certain issues in the world, if you care about climate change or racial injustice, whining and complaining is not going to fix that problem. .

“We need young people to step up and actually work and build and create things … that is going to help solve all the problems of the future. I think that’s one of the reasons it’s gone so viral.”