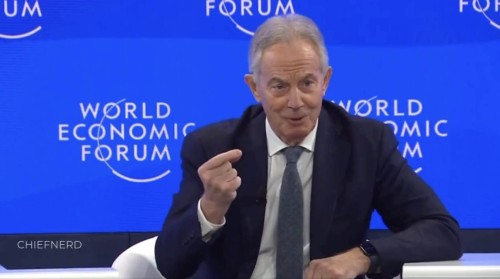 This week, global elites and world leaders are gathered in Davos, Switzerland for the World Economic Forum (WEF) annual summit.

Tony Blair, a former prime minister of the United Kingdom, has advocated for the development of “national digital infrastructure” to facilitate the distribution of new vaccines and to determine who is vaccinated or who is not for future pandemics.

“You need to know who’s been vaccinated and who hasn’t been,” said Blair at the WEF summit. “Some of the vaccines that will come on down the line will be multiple. There will be multiple shots. So you’ve got to have reasons to do with healthcare more generally. But certainly, for a pandemic or for vaccines, you’ve got to have a proper digital infrastructure. And many countries don’t have that and most countries don’t have that.”

DAVOS WATCH: Former UK Prime Minister Tony Blair calls for a digital database to monitor who is vaccinated and who is not for a future “pandemic” #wef23 pic.twitter.com/nDYmI5cPLA

“I think there’s a huge impetus now for a national digital infrastructure. Digitization in health care is, I think, one of the great game changers.”

According to Blair, the introduction of these new vaccines highlights the need for countries to invest in “national digital infrastructure.”

“We should be helping countries to develop a national digital infrastructure, which they will need with these new vaccines,” he said.

“And then finally, it’s also about showing people and showing the political leadership that you can make a positive difference to your healthcare system by adopting these measures because they’ve got an impact beyond any particular disease or pandemic,” he continued.

The Gateway Pundit reported in May 2o22 that World Health Organization’s “global pandemic treaty” includes a plan for a mandatory, universal digital passport and ID system.

In fact, the globalist organization has already contracted a German-based company, called ‘T-Systems’, to develop the technology with plans to link every person on the planet to a QR code digital ID.

They’re that confident the measures will be approved.

From the joint WHO and T-Systems announcement:

It is intended to serve as a standard procedure for other vaccinations such as polio or yellow fever after COVID-19. The WHO has selected T-Systems as an industry partner to develop the vaccination validation services.”

According to Garret Mehl – the head of WHO’s Department of Digital Health and Innovation, the plan for the new universal system is to issue a QR code digital ID to every single person on the planet.

From Mehl (via The Brownstone Institute):

“Vaccination certificates that are tamper-proof and digitally verifiable build trust. WHO is therefore supporting member states in building national and regional trust networks and verification technology.

The WHO’s gateway service also serves as a bridge between regional systems. It can also be used as part of future vaccination campaigns and home-based records.”

It can be recalled that the G20 leaders issued a joint declaration at the end of the G20 Summit in Bali, Indonesia last year. The joint declaration advocated for a universal standard on proof of vaccination for international travel and urged the creation of “global digital health networks to strengthen prevention and response to future pandemics.”

The declaration comes after the Health Minister of Indonesia, Budi Gunadi Sadikin, advocated for a global digital health certificate during the B20 Summit in Bali, Indonesia.

Speaking to the crowd, Sadikin said, “Let’s have a digital health certificate acknowledged by WHO. If you have been vaccinated or tested properly, then you can move around. So for the next pandemic, instead of stopping the movement of the people one hundred percent, which [collapse] the economy globally, you can still provide some movement of the people.”
images/ondertekening.jpg
Omhoog
Plaats reactie
1 bericht • Pagina 1 van 1