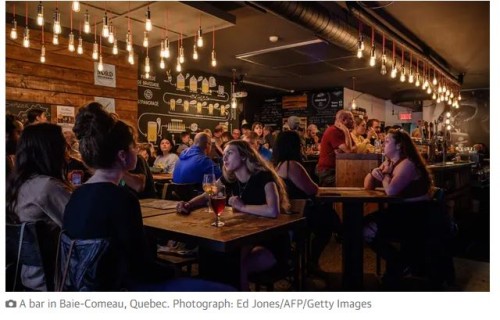 New alcohol guidelines recommending that Canadians limit themselves to just two drinks a week – and ideally cut alcohol altogether – have prompted intense debate over risk versus enjoyment in a country where the vast majority of adults regularly consume alcohol.

The Canadian Centre on Substance Use and Addiction (CCSA) this week called for a substantial reduction in consumption, warning that seemingly moderate drinking poses a number of serious health risks, including cancer, heart disease and stroke.

The new guidelines, funded by Health Canada, represent a dramatic shift from previous recommendations issued in 2011, when Canadians were told that low-risk consumption meant no more than 10 drinks a week for women and 15 drinks a week for men.

“We wanted to simply to present the evidence to the Canadian public, so they could reflect on their drinking and make informed decisions,” said Peter Butt, a professor of family medicine at the University of Saskatchewan and a member of the panel that drafted the guidelines. “It’s fundamentally based on the right to know.”

In the UK, the NHS recommends no more than six 6oz glasses of wine or six pints of 4% beer per week – ideally spread across three days or more. Health officials in the United States recommend no more than two drinks per day for men and only one for women.

But Canadian experts say that new research suggests three to six drinks a week should be considered moderate risk for both men and women, and seven or more drinks a week is high risk. In addition to elevated risk of colon and breast cancer, as well as heart disease and strokes, the CCSA also identified both injuries and violence as negative outcomes from drinking alcohol.

“This isn’t about prohibition. This is simply about reducing the amount one drinks,” said Butt.

The guidelines also warn that no amount of alcohol is safe when pregnant or trying to get pregnant. While abstinence during breastfeeding is the safest option, a standard drink occasionally does not significantly elevate risk.

The new guidelines were met with skepticism by some health experts.

“This type of research often marginalizes other considerations of health and wellbeing from alcohol,” said Dan Malleck, a professor of health sciences at Brock University.

“With their job as the Canadian Center on Substance Abuse and Addiction, there’s no space in there for considering there might be benefits. Their job is to find harm.”

Malleck described the guidelines as “irresponsible”, and said they risk creating “anxiety and stress” among Canadians who once saw themselves as moderate drinkers but now occupy a “high-risk” category.

“The research they’re using also ignores the enjoyment and pleasure and stress relief and collegiality associated with alcohol. None of those things are in the calculation whatsoever,” he said. “We aren’t just machines with inputs and output of chemicals or nutrition. We actually exist in a social space. And that has a significant impact on our health.”

Others, however, see the guidelines as an attempt to help Canadians better understand the realities of alcohol consumption.

“Alcohol is a psychoactive drug. Occasional use isn’t going to have really significant effects. Even if you occasionally use something like heroin, you probably wouldn’t see significant effects on your life. But that’s the thing: people aren’t using alcohol occasionally – they’re using it every day,” said Taryn Grieder, a professor of psychology at the University of Toronto.

“The hope is that people will moderate their usage and not drink every day, because we’ve seen research that has shown that alcohol is a carcinogen.”

Grieder says that there are components in alcohol that can be beneficial, but are typically only found in certain drinks.

“A glass of red wine a day might have some benefits. But not beer, not a shot of hard alcohol. I think people took this idea of alcohol possibly having health benefits and really ran with it.”

The CCSA also suggested there could be benefits in mandatory labelling of alcoholic beverages – warning of possible health risks and including guidance on consumption standards.

“It might help change the perception for people, with labels showing cirrhosis of the liver and the possible long-term effects that drinking can have,” said Grieder. “Everyone is different and some people metabolize alcohol differently.

“But these guidelines are for the average person, and the hope is that people will recognize the risks associated with use – and especially long-term use.”
images/ondertekening.jpg
Omhoog
Plaats reactie
1 bericht • Pagina 1 van 1