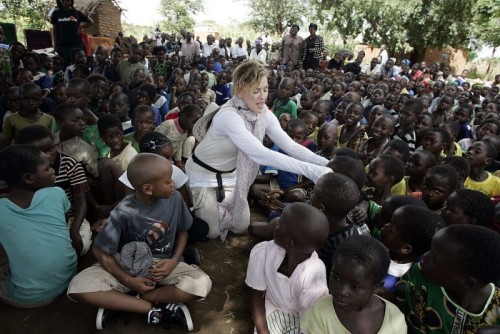 US Pop Star Madonna (C) interacts with Malawian children at Mkoko Primary School on April 2, 2013 in the region of Kasungu, central Malawi, one of the schools Madonna’s Raising Malawi organization has built jointly with US organization BuildOn. Madonna, said to be the single largest international philanthropic donor to Malawi, also supports childcare in the country which is home to nearly a million children orphaned by AIDS. She arrived in Malawi on March 31 with the two children she adopted from the small landlocked African country. AFP PHOTO / AMOS GUMULIRA (Photo credit should read AMOS GUMULIRA/AFP via Getty Images)

The Ethiopian World Federation (EWF), a philanthropic group, has accused Madonna of trafficking and sexually abusing children from Malawi.

Popstar Madonna herself adopted four kids from Malawi, a landlocked nation in southeast Africa. There, she established the non-profit organization Raising Malawi in 2006 with the goal of assisting orphans and vulnerable children via health and education initiatives.

The EWF has requested that Malawian President Lazarus Chakwara investigate Madonna’s charitable endeavors and “restrict her and her associate’s accessibility to Africa and to African children as a precautionary measure until a thorough investigation is done into child trafficking, sex exploitation, sexual slavery, adoption reversal, threat of coercion, fraud, deception and abuse of power or vulnerability.”

“Gay porn stars were photographed in pornographic pictures with Madonna performing vulgar sex acts with the same sex which should have been disclosed during her adoption case in 2006 in Lilongwe, Malawi. Madonna had to sign a contract that forbade the book from including images of child pornography, bestiality, or religious imagery. Shortly after signing that agreement, Madonna founded a company called Maverick, a partnership with Time Warner. She now holds total artistic control over any work released by Maverick, who is now the book’s publisher. The agreement she signed with Time Warner with the sexually explicit content in the book Sex was null and void,” the EWF’s petition stated.

According to the group, the singer is allegedly using her adoptive son from Malawi, David Banda, “for sexual exploitation and social experimentation.” The EWF also charged Madonna with making a false statement about David’s father’s absence in her adoption application.