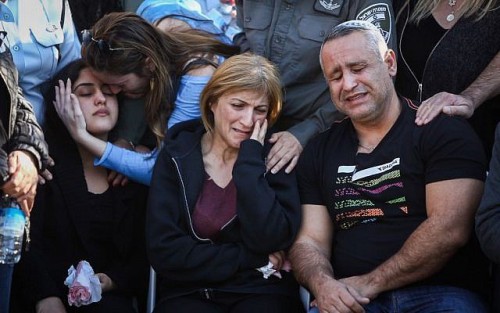 The family of slain policewoman Hadar Cohen, 19, at her funeral 2016

The new patriotic government in Israel wants to bring back the death penalty for terrorists, Arutz Sheva reports. The new government will also recognize Israeli sovereignty over Jewish settlements in Judea and Samaria.

Leaked documents recently revealed how the EU is funding the illegal “Palestinian” takeover of Judea and Samaria.

The coalition agreement states that “Due to the intensification of acts of terrorism with the intention of harming the State of Israel as the state of the Jewish people, and in order to defeat the threats, the coalition factions will enact, prior to the passage of the budget for 2023, a death penalty law for terrorists”, Arutz Sheva reported.

Ofer Cohen, the father of Border Policewoman Hadar Cohen, who was murdered in a terrorist attack in 2016, demanded the new government implement the death penaltyfor terrorists. “I don’t understand why a person who murdered a girl who did nothing wrong should remain alive. I expect and hope that MK Ben-Gvir will promote the death penalty for terrorists like this. A life sentence and more years in prison is simply letting him continue his life in our prison camp,” according to Arutz Sheva.

Border policewoman Hadar Cohen was killed by Palestinian attackers in a stabbing and shooting attack outside Jerusalem’s Old City 2016. “Police said the 19-year-old, who was shot in the head by one of the Palestinian gunmen, managed to return fire before losing consciousness, helping to thwart a potentially worse attack by the three assailants”, Times of Israel reported.

US Secretary of State Antony Blinken congratulated prime minister-elect Benjamin Netanyahu on Thursday on the formation of a new government, saying that the US will work with Israel “on the basis of the policies they pursue, not the personalities that happen to form the government.”

On Monday, Israeli Channel 13 revealed a secret document showing the European Union has secret plans to help the PLO-run “Palenstinian Authority” illegally annex territory in Judea and Samaria. Knesset member Orit Strock of the Religious Zionism Party party called for an end to the “massive investment by the European Union in a subversive plan to establish a Palestinian state contrary to existing agreements and the law, and even worse, in cooperation with Israel’s Civil Administration. This dangerous farce must stop, and it will stop: this is exactly what the elections were about, and we do not intend to give up the right and duty to protect all parts of our country against a hostile takeover,” she said.

“Once again, the façade has been stripped away from the ‘civil society,’ ‘humanitarian aid’ and ‘human rights’ organizations dedicated to undermining Israeli sovereignty”, said patriotic NGO Regavim. “The European Union’s massive involvement in the Palestinian Authority’s strategic annexation of Area C was exposed, once again, on Israeli television this evening – precisely as Regavim has been exposing it since our 2014 report, ‘The Last Colony,’ and in subsequent studies of the War of Attrition taking place on the ground in Judea and Samaria. The State of Israel must take decisive action against this brazen meddling, and prevent the establishment of a terrorist state in the heart of the Jewish homeland,” it said in the statement.