Woke Disney Is Back! New CEO Says Those in Power “Have an Extra Responsibility” to Promote Gun Control

Woke Disney Is Back! New CEO Says Those in Power “Have an Extra Responsibility” to Promote Gun Control

Woke Disney Is Back! New CEO Says Those in Power “Have an Extra Responsibility” to Promote Gun Control
By Cullen Linebarger
Published December 7, 2022 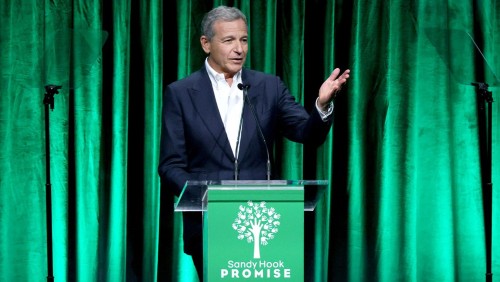 Disney’s war on American culture seemingly took a hiatus after new CEO Bob Iger vowed to avoid political controversy. After his comments at a gun control event, though, one can safely assume the war is back on.

Iger began his speech stressing his role as a family man and CEO. “As a grandfather, as a father, as CEO of The Walt Disney Company, I believe there is no greater or more important task than ensuring the safety and well-being of our children,” Iger said.

“Those of us who are in positions to affect change, whether it’s by influencing laws of shaping culture or supporting organizations on the frontlines, I think we have an extra responsibility.”

Obama also spoke at the event and spewed his usual demagoguery. He lamented his “biggest disappointment” in office was Congress failing to pass gun control legislation. Obama went on to whine about Congress bowing to the “gun lobby.”

From the former “firearm salesman of the year”:

“Perhaps the most bitter disappointment of my time in office, the closest I came to being cynical, was the utter failure of Congress to respond in the immediate aftermath of the Sandy Hook shootings. To see almost the entire GOP, but also a decent number of Democrats equivocate and hem and haw and filibuster and ultimately bend yet again to pressure from the gun lobby.”

Despite his previous comments vowing political neutrality, no one should be surprised by Iger linking arms with arguably the worst president in history to declare war on America’s gun owners. Iger, after all, is a longtime Democrat who helped fundraise for Crooked Hillary Clinton’s presidential campaign.

He also tried to defend liberal bias at Disney in 2013 after ABC “News” and ESPN bashed various conservatives. Instead, Iger claimed:

“We have at times either presented the news in slightly inaccurate ways through mistakes or in ways that we weren’t necessarily proud of. But I firmly stand behind the integrity of our news organizations.”

Interesting how such “mistakes” disproportionately affect one side of the political aisle, no?

The fiduciary duty Iger has as CEO to make money for Disney, not weigh in on politics. One way to accomplish this is actually producing films audiences love rather than woke, box office bombs.

Do not count on him following this course of action, though. Iger has already proven he is too weak to counter the radical left.
images/ondertekening.jpg
Omhoog
Plaats reactie
1 bericht • Pagina 1 van 1