Protestors Outside Apple Factory in China Beaten and Detained

Protestors Outside Apple Factory in China Beaten and Detained 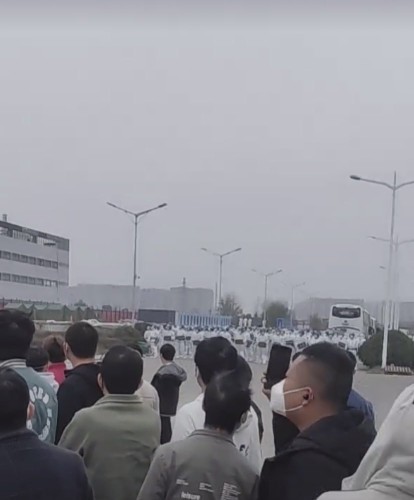 Employees at the world’s biggest Apple iPhone factory in Zhengzhou, China, were beaten and detained after protests against COVID restrictions and pay rates.

The area has been under severe restrictions as the Chinese government attempts to control a recent COVID outbreak. The lockdown resulted in an exodus from the area with many workers abandoning homes and attempting to flee the area by scaling fences.

Employees at the world’s biggest Apple iPhone factory were beaten and detained in protests over pay amid anti-virus controls, according to witnesses and videos on social media Wednesday, as tensions mount over Chinese efforts to combat a renewed rise in infections.

Videos that said they were filmed at the factory in the central city of Zhengzhou showed thousands of people in masks facing rows of police in white protective suits with plastic riot shields. Police kicked and hit a protester with clubs after he grabbed a metal pole that had been used to strike him.

Frustration with restrictions in areas throughout China that have closed shops and offices and confined millions of people to their homes has boiled over into protests. Videos on social media show residents tearing down barricades set up to enforce neighborhood closures.

The ruling Communist Party promised this month to try to reduce disruptions by shortening quarantines and making other changes. But the party is sticking to a “zero-COVID” strategy that aims to isolate every case while other governments relax controls and try to live with the virus.