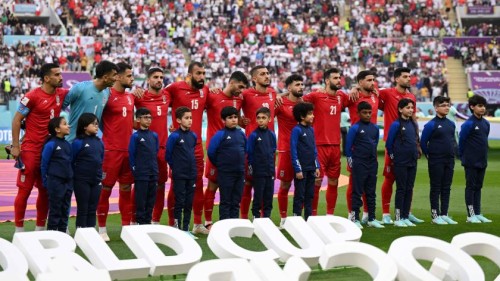 ayers on Iran’s national soccer team chose not to sing their country’s national anthem prior to their World Cup opener against England on Monday.P

Along with silence from players, there were boos heard during the playing of Iran’s national anthem at Khalifa International Stadium in an act of support for protesters in their home country.

Protests have swept Iran after 22-year-old Mahsa Amini died in the custody of the country’s morality police in September. Those protests have been violently cracked down on, with at least 419 people being killed, according to Human Rights Activists in Iran.

All soccer matches in Iran have been closed to the public since those protests began. Iranian fans packed Khalifa International Stadium on Monday with many showing the phrase “Woman, Life, Freedom” on shirts and signs. Others displayed the names of women protesters who were killed in recent weeks.

In the 22nd minute of Iran’s match against England, fans chanted Amini’s name.

Iran trails England 3-0 at halftime. The country will face Wales on Friday, Nov. 25, before rounding out Group B play against the United States on Tuesday, Nov. 29.
images/ondertekening.jpg
Omhoog
Plaats reactie
1 bericht • Pagina 1 van 1