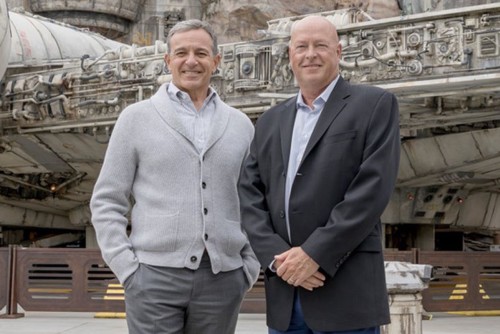 In a shocking turn of events, Disney company reinstated Bob Iger as CEO on Sunday night after less than a year in retirement, replacing Bob Chapek.

The board of directors announced Iger’s unexpected comeback and confirmed that his successor, Bob Chapek, had stepped down from his position.

“The Walt Disney Company announced today that Robert A. Iger is returning to lead Disney as Chief Executive Officer, effective immediately,” the company said in a statement.

Iger, who had previously served as CEO for 15 years until retiring last year, has agreed to serve for 2 more years to save the company after disappointing quarterly results.

“Iger, who spent more than four decades at the Company, including 15 years as its CEO, has agreed to serve as Disney’s CEO for two years, with a mandate from the Board to set the strategic direction for renewed growth and to work closely with the Board in developing a successor to lead the Company at the completion of his term. Iger succeeds Bob Chapek, who has stepped down from his position.”

“We thank Bob Chapek for his service to Disney over his long career, including navigating the company through the unprecedented challenges of the pandemic,” said Susan Arnold, Chairman of the Board.

“The Board has concluded that as Disney embarks on an increasingly complex period of industry transformation, Bob Iger is uniquely situated to lead the Company through this pivotal period,” she continued.

“Iger has the deep respect of Disney’s senior leadership team, most of whom he worked closely with until his departure as executive chairman 11 months ago, and he is greatly admired by Disney employees worldwide—all of which will allow for a seamless transition of leadership,” Arnold said.

In a statement, Iger said that he is thrilled to return as Disney’s CEO following Chapek’s departure.

“I am extremely optimistic for the future of this great company and thrilled to be asked by the Board to return as its CEO,” Iger said.

“Disney and its incomparable brands and franchises hold a special place in the hearts of so many people around the globe—most especially in the hearts of our employees, whose dedication to this company and its mission is an inspiration. I am deeply honored to be asked to again lead this remarkable team, with a clear mission focused on creative excellence to inspire generations through unrivaled, bold storytelling.”

According to Reuters, investors were disappointed by Disney’s latest earnings report, which detailed persistent losses at the company’s streaming media unit, which includes Disney+.

The Gateway Pundit previously reported that the woke firm would soon begin enforcing layoffs, implementing a targeted hiring freeze, and limiting business travel to essential only as part of a wide cost-cutting initiative.

“We are going to have to make tough and uncomfortable decisions,” former Disney CEO Bob Chapek wrote in a memo to top executives. “But that is just what leadership requires, and I thank you in advance for stepping up during this important time. Our company has weathered many challenges during our 100-year history, and I have no doubt we will achieve our goals and create a more nimble company better suited to the environment of tomorrow.”

This unexpected development for the biggest filmmaker in the world caught the entertainment industry and Wall Street by surprise and has been a major topic online.