CORRUPT MEDIA AND BIG TECH COLLUSION: They Slander and Besmirch President Trump While Censoring Him Completely

CORRUPT MEDIA AND BIG TECH COLLUSION: They Slander and Besmirch President Trump While Censoring Him Completely 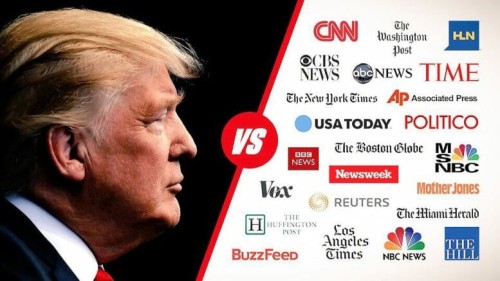 The US Media is corrupt, colluding, and dishonest. It is a collective much more than media and it is getting worse.

We have never seen any man get the treatment from the media that President Trump receives. They slander him, besmirch him, call him names, laugh at him, post questionable articles that damage him from anonymous sources, and lie about him.

The media never reports on him fairly. Their efforts are to get the average unthinking person to believe that “orange man is bad”.

On the other hand, they almost never report on his successes. While running for President they ignored the large crowds who showed up for him at every rally. They still do. Only a handful of honest media outlets report on the President’s rallies and massive crowds (e.g. OAN, RSBN, and The Gateway Pundit).

President Trump’s successes with the economy and foreign policy were so good that they were arguably the best ever. His economy was on fire after eight years of Obama’s America last economy. President Trump lowered taxes and made America energy independent and the economy soared. Real wages increased while inflation was almost nonexistent.

President Trump put in place trade deals that were good for America, destroyed ISIS, created peace deals in the Middle East, and showed China was nothing more than a paper tiger.

The media rarely reported on his successes, but this corrupt media was happy and earnest in reporting on the many lies about the President colluding with Russia. The corrupt DOJ made up crimes against him and the media was happy to report them. These were all lies. We now know Hillary and Obama were behind these bogus claims and instituted them to keep the focus on President Trump and not on their many crimes.

Then came the 2020 Election where the results in numerous swing states never should have been certified. The media ignored the obvious crimes and corruption that led to the results used to steal the election from President Trump. The media went silent.

Big Tech this whole time was slowly and then quickly censoring conservatives. Eventually, they kicked the President of the United States off their platforms, Donald Trump.

The President, his supporters, and conservative publications are beneath the media and Big Tech. These huge media giants work together to decide what is true. They are the owners of the information like the media in communist and fascist regimes.

Lee Smith recently shared that our US mainstream media is something much different than what we think it is.

The Intelligence Community believes they are the truth, they run this country, and they decide what to share and what not to. By doing this they prove that they are anything but intelligent and they make us stronger in our resolve to seek and report the truth.
images/ondertekening.jpg
Omhoog
Plaats reactie
1 bericht • Pagina 1 van 1