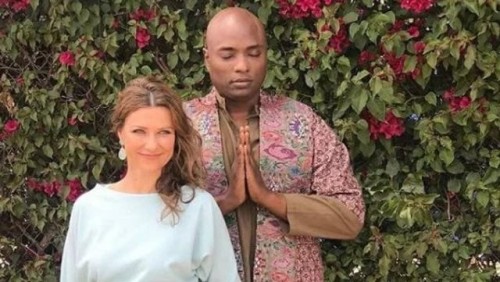 Norway’s princess Märtha Louise has given up her royal duties to be with her American witch doctor fiancé who claims he rose from the dead.

Durek Verrett has come under fire for his ‘voodoo’ witch craft practices and claims that cancer is just a choice.

BBC reported:
Norway’s Princess Märtha Louise has relinquished her royal duties to focus on her alternative medicine business with her fiancé, a self-styled shaman.

The Princess will keep her title, but is surrendering official duties to “create a clearer dividing line” between her private and royal role.

Her fiancé, Durek Verrett, has promoted unfounded medical practices, including suggesting cancer is a choice.

The American also claims to have influenced Gwyneth Paltrow.

Princess Märtha Louise is “relinquishing her patronage role” as she and Mr Verrett seek to “distinguish more clearly between their activities and the Royal House of Norway”, the palace said in a statement. It added that King Harald V had decided she would keep her title.

“She has performed her duties with warmth, care and deep commitment,” the statement said.

Despite the announcement, King Harald described Mr Verrett as a “a great guy and very funny to be with”.

“He has a lot of humour, and we laugh a lot, even in this difficult time. I think both we and he have gained a greater understanding of what this is about, and we’ve agreed to disagree,” King Harald told Norwegian reporters.