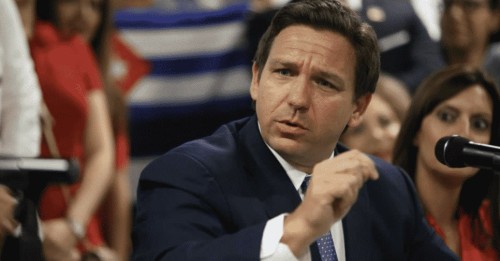 Florida governor Ron DeSantis has sounded the alarm after an American subsidiary of Chinese firm JOINN Laboratories purchased 1,400 acres of land in the Sunshine State.

According to Levy County, JOINN Laboratories, CA Inc. purchased the land from L&T Cattle & Timber, LLC in the summer and had expressed a desire to construct a "primate quarantine facility and/or primate research laboratory."

The land is currently zoned as "Forestry/Rural Residential," which means it would have to be rezoned if the proposed facility were to be built. The county revealed, however, that it had not yet received an application from JOINN Laboratories to initiate the proces

In a statement to the Epoch Times on Thursday, DeSantis' office explained that he "has been consistently opposed to the Chinese Communist Party's growing influence in Florida," adding that, "this proposed facility is a prime example of the type of activity that we are acting to prohibit."

On Sept. 22, DeSantis signed Executive Order 22-216, which banned government entities from "procuring technology products and services from companies owned by, controlled by, or domiciled in foreign countries of concern," including China, Cuba, Russia, Iran, North Korea, Syria, and Venezuela.

That same day, he proposed legislation aimed at preventing companies from the aforementioned countries from purchasing land near US military bases.

"There have already been instances of Chinese Communist Party-affiliated companies purchasing land near military bases in other states," a press release stated, "including Grand Forks Air Force Base in North Dakota. Florida is home to 21 military bases from every branch of the armed forces, and while the state has allocated money to purchase land nearest to some of these bases to increase security perimeters, more needs to be done to protect our domestic national security assets."

Florida is fifth in the nation when it comes to foreigners holding interest in private agricultural land, at 5.8 percent, however DeSantis made it very clear he hopes to ensure none of that land falls into the wrong hands.

“From server farms to farmland, the Communist Party of China has been worming its way into our nation’s data storage systems and buying up tracts of land near sensitive national security sites,” he said.

“By prohibiting the purchase of lands, state contracts with Chinese technology firms, and the infiltration of CCP-affiliated groups such as Confucius Institutes, Florida is leading the way to protect our nation from international foes.”
images/ondertekening.jpg
Omhoog
Plaats reactie
1 bericht • Pagina 1 van 1