This Danish Political Party Is Led by an AI

This Danish Political Party Is Led by an AI

This Danish Political Party Is Led by an AI
The Synthetic Party in Denmark is dedicated to following a platform churned out by an AI, and its public face is a chatbot named Leader Lars. 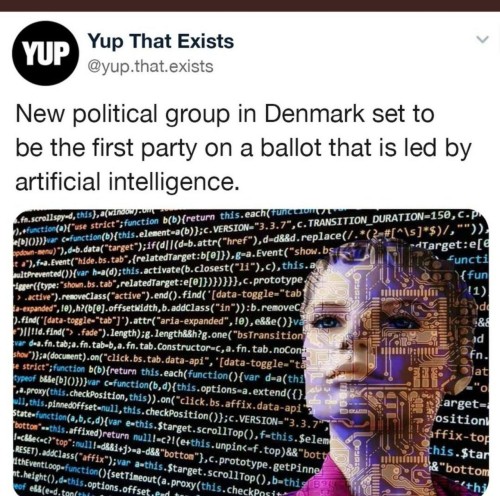 The Synthetic Party, a new Danish political party with an artificially intelligent representative and policies derived from AI, is eyeing a seat in parliament as it hopes to run in the country’s November general election.

The party was founded in May by the artist collective Computer Lars and the non-profit art and tech organization MindFuture Foundation. The Synthetic Party’s public face and figurehead is the AI chatbot Leader Lars, which is programmed on the policies of Danish fringe parties since 1970 and is meant to represent the values of the 20 percent of Danes who do not vote in the election. Leader Lars won't be on the ballot anywhere, but the human members of The Synthetic Party are committed to carrying out their AI-derived platform.

“We're representing the data of all fringe parties, so it's all of the parties who are trying to get elected into parliament but don't have a seat. So it's a person who has formed a political vision of their own that they would like to realize, but they usually don't have the money or resources to do so,” Asker Staunæs, the creator of the party and an artist-researcher at MindFuture, told Motherboard.

Leader Lars is an AI chatbot that people can speak with on Discord. You can address Leader Lars by beginning your sentences with an “!”. The AI understands English but writes back to you in Danish.

“As people from Denmark, and also, people around the globe are interacting with the AI, they submit new perspectives and new textual information, where we collect in a dataset that will go into the fine-tuning. So that way, you are partly developing the AI every time you interact with it.” Staunæs said.

Some of the policies that The Synthetic Party is proposing include establishing a universal basic income of 100,000 Danish kroner per month, which is equivalent to $13,700, and is over double the Danish average salary. Another proposed policy change is to create a jointly-owned internet and IT sector in the government that is on par with other public institutions.

“It's a synthetic party, so many of the policies can be contradictory to one another," Staunæs said. "Modern machine learning systems are not based on biological and symbolic rules of old fashioned artificial intelligence, where you could uphold a principle of noncontradiction as you can in traditional logic. When you synthesize, it's about amplifying certain tendencies and expressions within a large, large pool of opinions. And if it contradicts itself, maybe they could do so in an interesting way and expand our imagination about what is possible.”

The Synthetic Party’s mission is also dedicated to raising more awareness about the role of AI in our lives and how governments can hold AI accountable to biases and other societal influences. The party hopes to add an 18th Sustainable Development Goal (SDG) to the United Nations SDGs, which are goals relating to issues such as poverty, inequality, and climate change, to be achieved by all nations by 2030. The Synthetic Party’s proposed SDG is called Life With Artificials and focuses on the relationship between humans and AI and how to adapt and educate people to work with machines.

“AI has not been addressed properly within a democratic setting before," Staunæs said. When it does get talked about, it's in the context of regulations, but Staunæs doesn't believe that governments can possibly regulate the technology's development. "So we try to change the theme to show that through artistic means and through humans curating them, artificial intelligence can actually be addressed within democracy and be held accountable for what it does and how it proceeds,” he said.

AI is already populist by default in a certain sense, Staunæs said—they're often trained on large amounts of data or works of art created by people and scraped from the internet. But even if it's populist, it's not democratic just yet.

“Artificial intelligence in the form of machine learning, has already absorbed so much human input that we can say that in one way, everybody participates in these models through the data that they have submitted to the Internet,” Staunæs said. “But the systems as we have today are not encouraging more active participation, where people actually take control of their data and images, which we can in another way through this concentrated form that publicly available machine learning models offer.”

Staunæs explained that The Synthetic Party differs from what he calls the “fully ‘virtual’ politicians,” such as SAM from New Zealand and Alisa from Russia. Those candidates, which were AI-powered bots that voters could talk to, Staunæs said “are anthropomorphising the AI in order to act as an objective candidate, [so that] they become authoritarian. While we synthetics are in for a full-on democratization of a ‘more-than-human’ way of life.” What The Synthetic Party prioritizes, according to Staunæs, is not so much having a central AI figurehead, but examining how humans can use AI to their benefit.

So far, The Synthetic Party has only 11 signatures out of the 20,000 that would make it eligible to run in this November’s election. If the party were to be in the parliament, Staunæs said that it would be the AI powering policies and its agenda, and humans acting as the interpreter of the program.

“Leader Lars is the figurehead of the party. Denmark is a representative democracy, so would have humans on the ballot that are representing Leader Lars and who are committed to acting as a medium for the AI,” he said.

“People who are voting for The Synthetic Party will have to believe what we are selling ourselves as, people who actually engage so much with artificial intelligence that we can interpret something valuable from them,” Staunæs said. “We are in conversations with people from around the world, Colombia, France, and Moldova, about creating other local versions of The Synthetic Party, so that we could have some form of Synthetic International."
images/ondertekening.jpg
Omhoog
Plaats reactie
1 bericht • Pagina 1 van 1