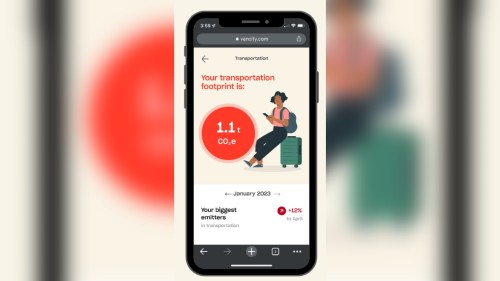 Since the COVID-19 pandemic has been revealed as the prelude to the Great Reset, many people now realize the extent to which science has been corrupted to serve the interest of politicians and globalists. This includes climate “science.”

The Vancouver City Savings Credit Union, known as Vancity, has teamed up with ecolytiq, one of the climate engagement technology firms in Europe, to provide the first Visa Carbon Counter in Canada.

“Vancity is taking another step in its commitment to climate action. It will be the first financial institution in Canada to offer its individual and business members a way to estimate the CO2 emissions that come from their purchases,” the company said in a statement.

The ecolytiq software calculates personal environmental impacts, such as CO2 values, on the basis of payment transactions.

Vancity claimed that Visa Carbon Counter cardholders will be able to understand the environmental impact of their purchases and receive advice on how to reduce their carbon footprint.

“We know many Vancity members are looking for ways to reduce the impact they have on the environment, particularly when it comes to the emissions that cause climate change,” said Jonathan Fowlie, Vancity’s Chief External Relations Officer who oversees the credit union’s impact and climate efforts.

“As a member-owned financial cooperative, we believe it is our job to do everything we can to help, especially when it comes to the decisions people make with their money. This tool will equip Vancity Visa credit cardholders with valuable information on their purchases and enable them to connect their daily spending decisions to the change they want to see in the world.”

In 2019, the Swedish fin-tech company Doconomy partnered with Mastercard to create the world’s credit card with a carbon limit.

“Doconomy is now launching the world’s first credit card with a carbon footprint limit, DO Black. The launch of this premium card marks the first milestone in the support that Doconomy provides to the UN Climate Change secretariat (UNFCCC) to encourage global climate action. DO Black not only helps users track and measure CO2 emissions associated with their purchases but also puts a limit on the climate impact of their spending. Users can now sign-up to register interest for DO Black,” Mastercard said in a statement.

Indeed, at this year’s WEF’s Annual Summit in Davos, Switzerland, China-based Alibaba Group spoke of new technology that would track people’s carbon footprints through the monitoring of their spending, eating, and traveling habits.

Klaus Schwab, the WEF founder and chairman, told thousands at the Davos summit that “the future is built by us, by a powerful community such as you here in this room.”

Since taking office in 2015, Canada’s Prime Minister Justin Trudeau has pushed the radical environmental agenda also being promoted by the WEF as part of its “Great Reset” agenda.

Indeed, Trudeau’s 2022 budget includes a portion that mandatory climate-related reporting is in the works for all federally regulated financial institutions in Canada.

This is part of a push for businesses to adopt so-called “Environmental Social Governance (ESG).”

ESG, as it is known, is a set of standards for business operations that can be used by global investors to see whether a company is following standards when it comes to its environmental, social, and governance work models.