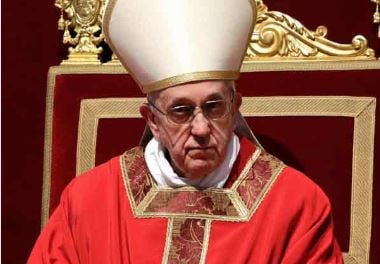 Pope Francis says that the world and its institutions require material changes to create a new economic system that creates food, health, economic and social rights for all.

Socialism hasn’t destroyed enough and so Pope Francis is calling for what seems to be socialism around the world.

Pope Francis said the need to reform the United Nations was “more than obvious” after the Covid-19 pandemic and the Ukraine war exposed its limits, in an extract of his new book published Sunday.

“In wartime, it is essential to affirm that we need more multilateralism and a better multilateralism,” but the UN is no longer fit for “new realities”, he added in an extract published by La Stampa daily.The organisation was founded to prevent the horrors of two World Wars from happening again, but although the threat represented by those conflicts was still alive, “today’s world is no longer the same”, said Francis.

“The necessity of these reforms became more than obvious after the pandemic” when the current multilateral system “showed all its limits”, he added.

Francis denounced the unequal distribution of vaccines as a “glaring example” of the law of the strongest prevailing over solidarity.

An individual by the name of Hans Despain reported this morning at Yahoo on the Pope’s recent actions. Despain praises the Pope’s latest actions.

Pope Francis has become the eminent voice of the economically destitute and the environment. Since being elected to the papacy Pope Francis insists that we need a new economic system that better provides basic needs for the global poor, along with guaranteed work and land.

Regarding the environment, Pope Francis contends we “must not be indifferent or resigned to the loss of biodiversity and the destruction of ecosystems, often caused by our irresponsible and selfish behavior.”

He warns: “Because of us, thousands of species will no longer give glory to God by their very existence. … We have no such right.”

For Pope Francis, economic destitution and environmental destruction are symbiotically linked. “Climate change is,” according to Pope Francis, displacing people, increasing poverty and “contributing to the heart-rending refugee crisis. The world’s poor, though least responsible for climate change, are most vulnerable and already suffering its impact.”

Pope Francis emphasizes globally there are a series of “profoundly interconnected crises” in “the areas of health care, the environment, food supplies and the economy,” not to mention regional wars, “social, humanitarian and ethical crises,” all calling for a “new vision,” to “rethink the future of the world,” and establish “a renewed sense of shared responsibility for our world.”

Pope Francis contends that supply-side economics is mistaken and Friedman and Hayek are false prophets. The pope worries that too many “people continue to defend trickle-down theories which assume that economic growth, encouraged by a free market, will inevitably succeed in bringing about greater justice and inclusiveness in the world. This opinion, which has never been confirmed by the facts, expresses a crude and naïve trust in the goodness of those wielding economic power and in the sacra­lized workings of the prevailing economic system.”