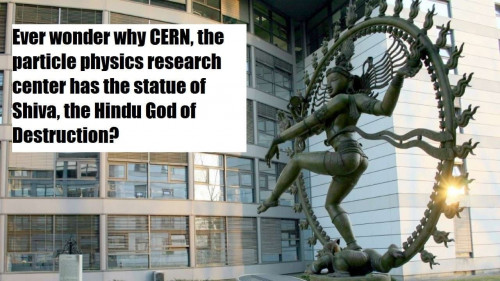 What does CERN mean for the future of the universe?

A model of the Large Hadron Collider in the CERN visitor's center in Geneva.
Johannes Simon/Getty Images
The European Organization for Nuclear Research, also known as CERN, is the world's largest particle physics laboratory. That means CERN studies the tiniest particles in the universe. CERN uses some of the world's most advanced equipment to do this, including the Large Hadron Collider (LHC). By studying the fundamental forms of energy and matter, CERN hopes to learn more abo­ut how the universe works.

While CERN is mainly concerned with the fundamental particles of the universe and the laws of nature, it has also spawned other notable advances in science. For example, in 1989, a scientist named Tim Berners-Lee proposed the creation of a distributed information system. That system evolved into what we call the World Wide Web. In fact, the world's first Web page was for CERN [source: CERN].

Still, most of the work done at CERN is meant to do one thing: increase human knowledge of the universe. Many scientists conduct experiments simply to learn more about how the laws of nature work with no thought to applicability. Scientists sometimes call this pure research. That's because the scientists have no motive beyond increasing knowledge itself.

Today, 20 European member states run CERN. These countries share the responsibility of funding CERN as well as the privilege of guiding activities at CERN facilities. Other countries also partner with CERN, using the laboratories for experiments and research.

Many scientists are excited over the prospect of CERN's research, particularly as the Large Hadron Collider prepares to come online. The LHC might shed light on some mysteries that have puzzled physicists going all the way back to Einstein and beyond. But according to some people, it might also bring about the end of the Earth.

How can one organization using a machine like the Large Hadron Collider solve universal mysteries, and could CERN really end all life as we know it? Keep reading to find out.

PRO: According to our understanding of the universe, the matter we can observe only accounts for about 4 percent of all the matter that exists. Physicists have proposed a kind of substance called dark matter that might make up to 25 percent of the matter in the universe when combined with what we can see. The other 75 percent might come from dark energy. Some scientists at CE­RN hope the LHC will uncover evidence of dark matter.

CON: The LHC could also produce black holes. A black hole compresses matter into a point of infinite density called a singularity. In general, most people think compressing matter like that constitutes a bad thing -- some worry the black holes generated by CERN could destroy the Earth. CERN scientists say that if the LHC does create black holes, they will be very small, harmless and will decay almost instantaneously.

PRO: CERN might discover a hypothetical particle known as the Higgs boson particle. One of the big mysteries of the universe deals with mass. Why is there mass? What determines if a particle has mass? A theory called the Higgs mechanism says that there may be an as yet undiscovered particle that could explain mass. Controlled collisions within the LHC could produce evidence of this particle.

CON: CERN might unleash a dangerous substance called strangelets upon the Earth. Like the Higgs boson particle, strangelets are purely hypothetical. But unlike Higgs particles, strangelets are really nasty customers. According to some, this stuff could disassemble any matter it comes into contact with and reassemble it into strange matter. One big drawback of this strange matter is that it's lifeless. CERN scientists point out that strangelets have never been observed in nature and that even if they did exist, they'd quickly decay before causing any trouble.

PRO: A further understanding of the universe could lead to amazing practical applications, including time travel! Some physicists theorize that the LHC could become the world's first time machine. They say that time travel to the past might only be possible as far back as to the invention of the first time machine [source: The Telegraph]. Other scientists aren't convinced by these theories, though.

CON: A greater understanding of the universe could allow a future super villain unprecedented access to information that could put us all in jeopardy. Granted, this is a very unlikely scenario, mostly because CERN is not in Metropolis.

In the en­d, it seems like CERN has everything under control. Their experiments recreate conditions that happen in nature all the time, and the world is still standing. The only difference is that the laboratory conditions are carefully controlled and observed.

Either way, CERN's activities could have a profound effect on us here on Earth. But the rest of the universe is likely to stay the course -- expanding continuously with little regard for what we get up to down here on our planet.

To learn more about CERN and the Large Hadron Collider, follow the links on the next page.

ConCERNed Citizens
Walter Wagner, a former nuclear safety officer, filed a lawsuit in the spring of 2008 in order to delay the Large Hadron Collider's progress. Wagner listed several concerns in the lawsuit, many of which involved the destruction of the Earth. As of this writing, the case has not gone to court [source: MSNBC].