https://americanmilitarynews.com/2021/0 ... -will-win/
Chinese state media vows military ‘will show up at US doorstep’ soon and ‘China will win’ 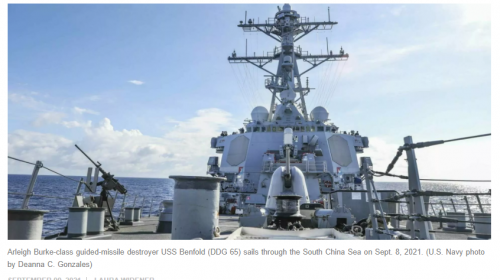 Chinese state-run Global Times media outlet published an op-ed from its editorial board on Wednesday vowing that China’s military will soon confront the U.S. in a hostile exchange.

“The US will definitely see the PLA show up at its doorstep in the not-too-distant future,” the op-ed said. “The two sides’ warships and aircraft on the seas will carry huge mutual strategic hostility, and the two countries will not yield to each other.”

“Once the situation gets out of control and triggers military clash between China and the US, we must give full play to our home field advantage. China will definitely win once there is a war,” the Global Times op-ed said.

The op-ed came in response to U.S. Navy guided-missile destroyer USS Benfold conducting a freedom of navigation operation near the Mischief Reef in the Spratly Islands of the South China Sea on Wednesday.

“What the US has done is a naked provocation, and this is obvious to all,” the Global Times op-ed said, adding that the ship “posed a threat” to the “many Chinese people and facilities” on the island.

The op-ed further called on China to take action. “Only by making the US have a taste of its own medicine can we touch the nerves of the US and its allies, and reshape the Western world’s understanding of US bullying in the South China Sea,” it said.

The U.S. Navy 7th Fleet said the U.S. warship sailed in accordance with international law “within 12 miles of Mischief Reef,” an area that China has heavily militarized and reportedly began flying military flights out of earlier this year.

“The land reclamation efforts, installations, and structures built on Mischief Reef do not change this characterization under international law. By engaging in normal operations within 12 nautical miles of Mischief Reef, the United States demonstrated that vessels may lawfully exercise high-seas freedoms in those areas,” the U.S. Navy said.

Mischief Reef is among the seven island reefs China claims as its own and has been militarizing in recent years. China established 9,000-foot runways on three islands in the South China Sea to accommodate any aircraft in its fleet, including its nuclear-capable H-6 bombers.

The U.S. has repeatedly denounced China’s militarization of artificial islands in the South China Sea, as well as its construction of military bases and other industrial facilities in the region, and aggressive behavior toward other nations’ ships in the region.

China claims most of the mineral-rich South China Sea, including areas that reach the shores of its smaller neighbors. Brunei, Malaysia, the Philippines, Vietnam and Taiwan also have overlapping claims to the maritime region. The U.S. has vowed to continue its freedom of navigation operations to ensure free passage in the South China Sea despite China’s threats.

In July 2020, the U.S. released its first official statement rejecting most of China’s territorial claims in the South China Sea as “unlawful.”

The U.S. position aligns with a 2016 Arbitral Tribunal decision, in which it rejected China’s claims as baseless against international law. Secretary of State Antony Blinken praised the decision on its fifth anniversary earlier this year, which China swiftly denounced.
images/ondertekening.jpg
Omhoog
Plaats reactie
1 bericht • Pagina 1 van 1